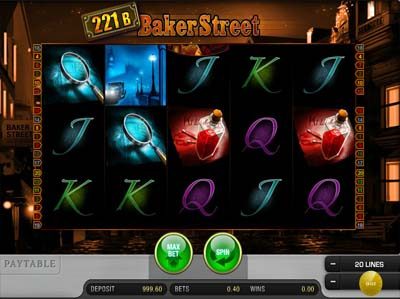 If you’ve ever dreamt of becoming Sherlock Holmes or being a fly on the wall during his investigations, this Merkur slot game may offer you just that opportunity. 221B Baker Street is an entertaining slot game, with good quality graphics and interesting animated features. Furthermore, it offers a very ambient atmosphere by means of the subtle soundtrack and the thematic backdrop. The symbols are, of course, all about the famous detective and some of his characteristic attributes. Such are the magnifying glass, the revolver and the bottle of poison. In addition, you will also have the lower value playing card symbols A, K, Q and J.

The layout of 221B Baker Street has 5 reels and 3 rows – probably the most common setup. You will notice there is a total of 20 paylines, however, you are free to adjust those. This also makes for a very comfortable betting range starting from 1p per spin. The maximum amount you can wager on these reels is £40 per spin. As far as the RTP goes, players can count on an average of around 96.00%.

Special Features in 221B Baker Street

You will be pleased to know that 221B Baker Street is actually rich with bonus features and special symbols. Therefore it can reward not only visually, but also very much with cold, hard cash prizes. First up is none other than Sherlock Holmes himself, who is the Wild symbol on these reels. He can replace any of the other symbols on the reels to help create winning sequences, except for the Scatters. You can also expect to see him in any position on the reels. 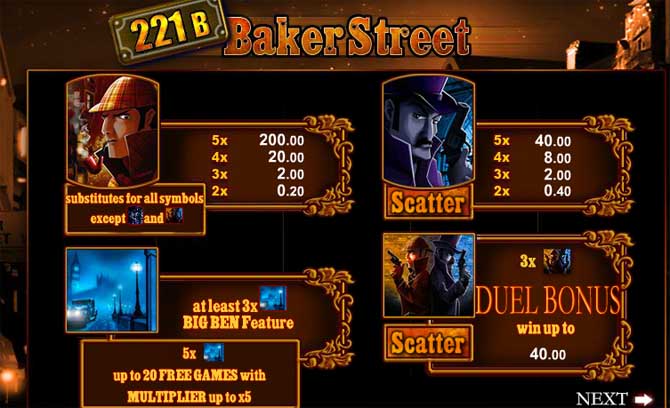 What’s more, though, you will have not one, but three different Scatter symbols in this game. One of them is Sherlock’s arch nemesis – Moriarty. He can offer you some handsome payouts, but he’s not quite the most desirable symbol on these reels. The other two Scatters are the Duel and Big Ben symbols. The latter will trigger the freespins bonus round, if you land three or more of it during a spin. You can gain 6, 14 or 20 freespins, depending on the number of Scatters, with a 5x multiplier.

You can also trigger the Duel Bonus feature, by landing 3 Duel Scatter symbols either during the freespins or the base game. During this bonus game, Sherlock and Moriarty will shoot at targets. Holmes’ shot will reveal your prize, whereas you can either accept it or choose to fire another round and hope for a higher amount. In addition, the game also features a Gamble features with two different side games that you may take advantage of. This will offer yet a further opportunity to increase your winnings, but caution is advised, as these games are double or nothing.

221B Baker Street is a fairly sophisticated slot game that offers plenty of opportunities to score the big wins. Furthermore, the graphics and overall theme are also very easy on the eye, which never hurts.