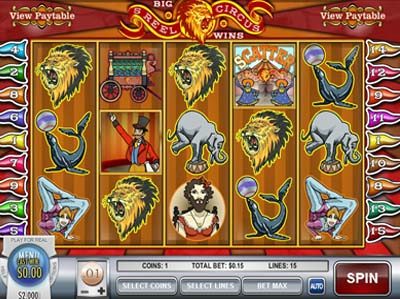 If you’re a fan of the circus, featuring lion tamers, dancing bears and scary/funny clowns, depending upon which side of the coin you sit, then you’ll love 5 Reel Circus. The game features a very amusement park sounding backing track, although the inclusion of so many children laughing and clapping comes across as being funfair creepy, rather than funfair fun. The reels are filled with various circus characters, like the aforementioned clowns, as well as seals that balance balls on their noses, contortionists, elephants standing on two legs, and bearded ladies.

The product offers up a five reel and three row layout, and Rival Gaming has also included 15 separate paylines alongside. The coin value is able to be switched between £0.01 and £1.00 per payline, and the amount of coins wagered per round can be changed from one to five. This allows a maximum overall wager of £75 per round to be placed by all players.

The icon of the gnarly tiger acts as the game’s wild symbol, and this will stand in for other symbols to craft a winning combination. The only icon not included in this is the scatter.

Speaking of the scatter symbol, this is represented by the opening to the circus tent, and three or more of these icons appearing anywhere on the reels will trigger the freespins round. This provides a total of 10 freespins of the reels, and all wins during this round have a triple multiplier included. A further 10 freespins can be activated again during the feature by spinning three or more scatters.

5 Reel Circus is an intriguing game to play, although the incorporated soundtrack is likely to lead to some sort of mental breakdown. Apart from this, the design of the game is well thought out, as is the inclusion of the 10 freespins feature.