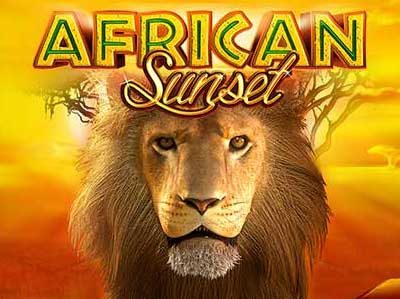 African Sunset is an online slot game by software developer GameArt. Typically for this software provider, the game is ablaze with colorful symbols, a flamboyant backdrop and quality graphics. The backdrop in this particular slot game features the fiery sunset over the African savannah. And the reels here picture its diverse inhabitants, such as lions, zebras, giraffes and rhinos. In addition to them, you will also see the lower value playing card symbols with leopard print on them. They include A, K, Q, J and 10. In addition, contrary to many other slots by the same developer, this one actually also has a soundtrack that features animal sounds, like elephant calls. 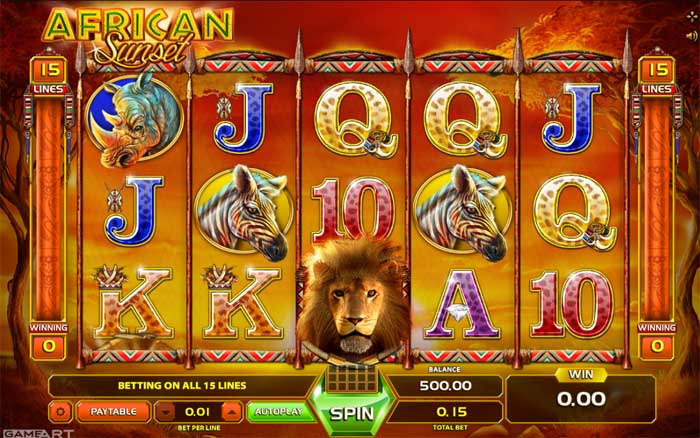 As far as the layout goes, though, there are 5 reels and 3 rows. This is pretty much the industry standard nowadays. In addition, there are also 15 paylines, but those are fixed. In other words, you will not be able to alter their number. As for the betting range, you will notice it isn’t a very wide one. Bets here can start as low as 15p per spin and reach a maximum of up to £7.50 per spin. The RTP is also satisfactory and the same for most GameArt games – 96%.

There are two special symbols in African Sunset, the first of which is the king of the savannah himself – the mighty lion. The Lion is the Wild symbol in this slot game and also the most lucrative one on the reels. It can also land in any position on the reels and replace any of the regular symbols. That way it offers players a better shot at landing winning spins. However, the only symbol it cannot replace is the Scatter. 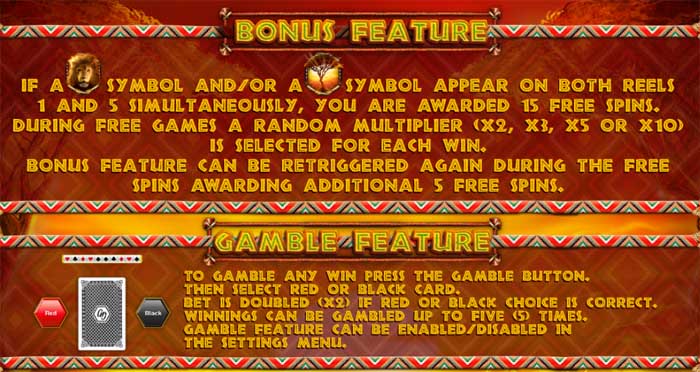 The Scatter depicts a lone tree standing against the setting sun. In combination with the Wild symbol, it can also help you trigger the freespins bonus round. If you land it together with the Wild on reels 1 and 5, you will activate the feature and receive a total of 15 freespins. What’s more, you will also instantly receive a prize of 2x your total bet. But the fun doesn’t end there.

During each of the freepins, you will receive a random multiplier 2x, 3x, 5x or 10x, which will further increase your wins. And better yet, you will also get the opportunity to retrigger the bonus feature and receive another 5 extra freespins. In addition, at the end of the freespins round, as well as after any winning spin, you will have the opportunity to gamble your prize. A simple game of double or nothing will see you either double your amount or lose it, so choose wisely. You will be able to take several turns at the game to keep on doubling your amount.

African Sunset has pretty decent visuals, though they aren’t the best we’ve seen from this developer. Gameplay is pretty standard and the medium variance here will allow for wins on regular intervals.