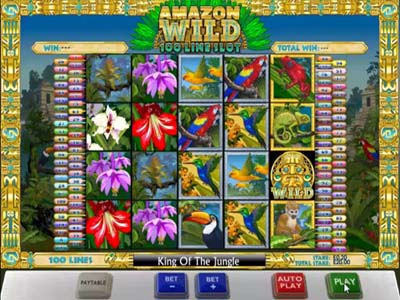 There’s a strong selection of video slot games which have utilised the rainforests and grasslands of various parts of the world to create the basis behind their products. Amazon Wild obviously transports you to the Amazin, and offers up various flora and fauna as its symbols. These include birds in the form of parrots, canaries, hummingbirds and toucans, a black panther, a red frog, a chameleon, a tree-based monkey, as well as a selection of flowers, including a red offering and a purple offering. The game is set out against a back drop of the jungle itself, as well as one or two ancient buildings poking out through the canopy.

Gamers will be able to play this game on a five reel and four row layout, which has also had a total of 100 different pay lines included in it by developer, Ash Gaming. These lines are not customisable, but the stake you place per spin can be altered up and down with the relevant buttons. This starts from its minimum of £0.01 per line, and increases up to £1 per line. This, therefore, offers a maximum overall wager amount of £100 per spin.

There’s a wild symbol included in this game, which is represented by the ancient Aztec carving. This will substitute for all other icons on the reels, except bonus scatter icons, and any two wilds found on a reel will expand to fill the entire reel with wilds.

As far as the scatter symbol goes, this is represented by the scroll treasure map. These pay out wherever they appear on the reels, and three, four or five of these will lead to the ‘Amazon Map Bonus Game’. This round requires you to select ruins on the said map, with each one of these rewarding a different prize pay out. The number of scatters in view on the reels will determine the number of picks you get in this feature round.

Amazon Wild is a very decent game from this developer, working its theme very nicely into its reels. The special features are a nice touch and it’s all very graphically impressive.