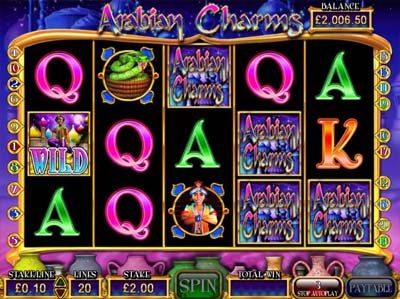 If you’ve ever been interested in being whisked away on an Arabian adventure, this slot machine from Barcrest aims to do just that. Bringing together all the mystique and adventurous features of the world of Arabia, the reels on this one are filled with icons of snake charmers, and their snakes in baskets, while A, K, Q and game logo symbols make up the remainder. Players will also get to experience the sound of relatively authentic theme music every time they spin the reels.

And speaking of the reels, there are five of these, which are merged with three rows to form the basic layout. A total of 20 different pay lines have also been added, and these are not customisable. However, you can change the stake per line that you play per round, which can be switched from its minimum of £0.01 up to £25, and therefore this allows all players to place a maximum over wager of £500 per spin.

The wild symbol, represented by an ornately decorated palace fronted by a dancing Arab, will substitute for all other icons on the reels to form a winning combination, with the exception of scatters.

The scatter symbol has the word, ‘BONUS’ scrawled across it, while a muscled genie is shown at the back. Three or more of these appearing anywhere on reels two, three and four will initiate the ‘Golden Trail Bonus’ round. This requires you to press the start button to spin the wheel. This decides the number of steps you will take up the cash path. Continue spinning the wheel and progressing until either the wheel lands on a ‘Collect’ outcome, or until you reach the top prize.

In addition, every spin of the base game has a chance of triggering the ‘Mystery Win Bonus’ round. This either creates a winning set of symbols if the result of the last spin was a loss, or will improve on a player’s current win.

Barcrest takes the Arabian theme and lightly scatters it through this product as far as icons go. However, the additional features and incorporated soundtrack both manage to make a compelling game to play.