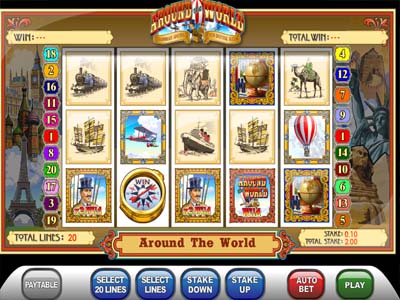 Around the World Slot Review

We’ve all heard of the tale, ‘Around the World in Eighty Days’, written by French novelist, Jules Verne, right? Well, this product from Ash Gaming translates the story into a video slot game, presenting you with reels which are surrounded by various landmarks from different locations, including the Eiffel Tower, The Houses of Parliament and the Statue of Liberty. As far as the actual reels go, these are filled with various different icons of transportation methods. So, you’ll get to spin through trains, elephants, hot air balloons, ships, camels, aeroplanes and galleons, as well as one or two other specialist symbols. Your game play appears to be backed by some form of carnival music.

There are five reels included in the layout, as well as three rows, while the developer has also added a total of 20 separate pay lines into it as well. The lines are able to be customised with the relevant buttons, giving you the option of setting it up in your own preferred way. Furthermore, the amount of money you take per spin is also changeable, starting out from a minimum of £0.02 per active line, and increasing up to £25. This will therefore allow all players to place a maximum overall wager of £500 per round.

There are two different wild icons included in this game. One is a close up of a man wearing a top hat who looks ready to lift off in his hot air balloon, while the other is the game’s logo. Both of these will substitute for any other icon on the reels to form a winning combination, with the exception of other wilds, scatters and globe symbols. The first wild, the top-hatted man, will also double the pay out.

The compass represents the scatter icon in this game, and these pay out wherever they appear. Each compass which points to the north will give a cumulative win multiplier of times two and up to five compasses pointing north give times 32.

Finally, the icon of the globe acts as the bonus icon, and if three, four or five of these appear on an active pay line, you’ll trigger the ‘Travel the World’ game. This sees you gamble or collect your bonus prize in the travel game. You’ll travel around the world in this bonus round, trying to avoid shipwrecks and collect treasures to receive a bonus multiplier up to four times, on the return to London. There are four routes to choose from, and if you do hit a shipwreck, all treasure is sunken and the bonus round ends.

This is a great game with an amazing theme from Ash Gaming. It’s all designed immaculately and presents a very entertaining product.