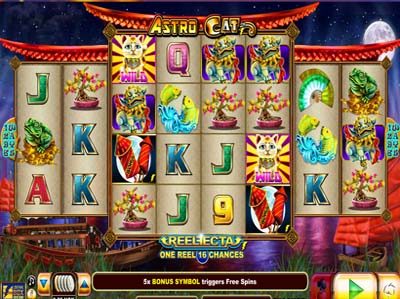 Astro Cat is a fairly unusual slot game by software provider Lightning Box. It has a traditional Chinese theme, and that is fairly common in the industry. However, when you start mixing that with cats from outer space – that is when things start getting a little weird. The setup isn’t also the kind that you see every day in most other slot games. But let’s first get the design and visuals aside. The backdrop depicts the red sails of Chinese ships, and a large full moon shining over them. The icons in this game are a mixture of regular lower value playing cards and classic Far Eastern imagery. We should also note that the soundtrack is great and creates a rather soothing and peaceful atmosphere.

And as for the layout, it’s somewhat complex, as you will see as soon as the game loads. It features a total of 8 reels. The first and last 2 each have 3 rows, whereas the middle 4 reels have 4 rows. There are a whopping 1,296 ways to win – also something unusual. And stakes here are understandably pricy, ranging from 50p per spin up to £500 per spin. The RTP here is about 95.44%.

The Astro Cat symbol is the Wild in this slot game and, interestingly, it can only appear on reels 3 and 4. But it can substitute for any of the other symbols on the reels to help contribute towards winning sequences. There is only one exception in that regard and that is the Bonus symbol. 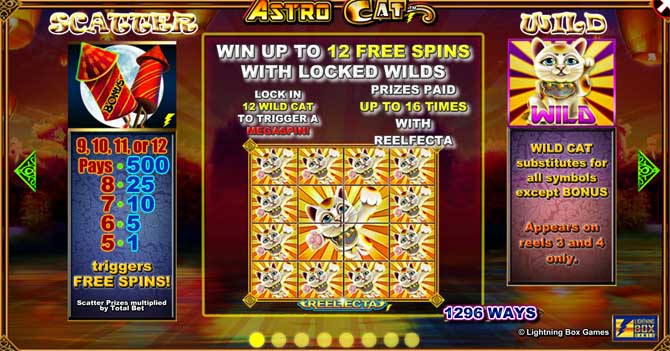 The Bonus symbol, in turn, depicts a couple of fireworks against the backdrop of the full moon, ready to launch. You will notice that this symbol can only appear on the outer positions of the main set of reels (the Reelfecta). It is responsible for triggering this game’s freespins bonus feature. And in order to do so, you will be looking to land at least 5 Bonus symbols in sight. This will award you a total of 12 freespins and a cash prize, depending on the number of Bonus symbols you landed. 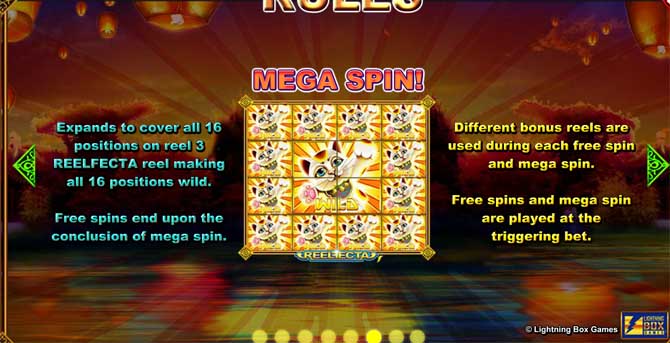 The freespins also come with a locked Wilds feature. Once the freespins start, keep an eye on the top left position of the Reelfecta. Either a cat or poison symbol will appear. If it’s the latter, you will receive a 2x payout and the bonus round will end. But if the cat symbol lands, it will lock in place and you will receive an additional freespin. And if you manage to fill the whole Reelfecta, this will trigger a single Megaspin. Note that you will certainly not have to face any poison symbols for the first 3 freespins.

Astro Cat may look complicated at first, but it’s not. In fact, only after a few spins, you will have gotten the hang of it. What makes this game attractive is the possibility of gaining some pretty handsome payouts during the bonus feature.