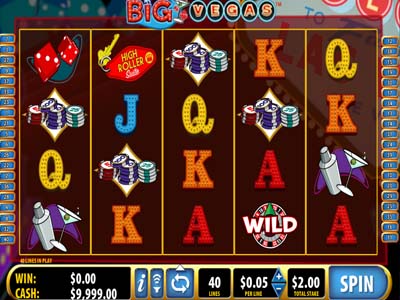 It’s a sure fact that not many of us will get to experience the thrills and bright lights of Las Vegas. However, with the Big Vegas slot game from Bally, you’ll be certain to get a glimpse into what it’s like in that atmosphere. The game has a series of icons included in it that relate to casino gaming, from poker chips to rolling dice, to slot machines that are oddly enough on fire, and a royal flush of cards. To accompany these, there’s a key to a high roller suite and a cocktail glass and shaker. Just the right kind of night out in Vegas that anyone would expect, right?

There’s a total of five reels and four rows worth of a layout. Alongside this, there’s forty active paylines included, which are not customisable. However, what is able to be changed in the game is the amount you wager, which starts from the minimum of £0.01 per pay line, meaning the minimum overall bet is £0.40 per spin. This can be increased up to £10 per line, meaning that if you’re a fan of placing maximum wagers, the highest bet you can place is £400 per spin.

There are two wild symbols included in the game, the standard one, which acts in the normal way of substituting other symbols to make a win, and the directional wild, which appears as a roulette wheel with an arrow on it. This appears on reels two and/or four, and when it does, the arrow spins and points in a direction, turning all icons in that way wild.

The ‘Free Games Lounge’ icon acts as a scattered freespins symbol. Three of these showing anywhere across reels two, three and four will begin the freespins round. A total of five freespins are awarded, and during this round, locked directional wilds can come in to play.

Big Vegas offers its players an insight into life in the city of lights. Its bonus features, graphics and soundtrack are all wonderful additions and make participating in the slot game that much more exciting.