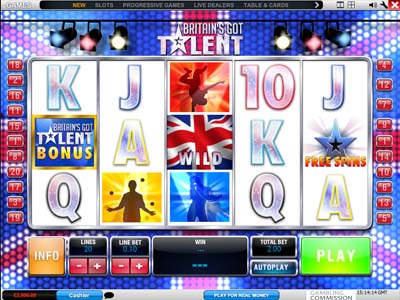 We’re all aware of the talent show by now. It graces our television screens once every year and is almost as loved by the nation as the other Syco productions, like X-Factor. Well, thanks to Ash Gaming, you can now experience all the thrills and excitement of the show via your computer in this video slot game. Complete with inclusive Britain’s Got Talent music, this one will surely present you with flashbacks of your favourite acts from every single series shown. The reels present icons of shadowed performers – a singer, a juggler, a break dancer – and these are joined by the regular slot symbols of A, J, K, Q and 10.

The layout of the game presents five reels and three rows, while the inclusive pay lines stand at 20. These are able to be altered to suit your own personal preferences, as is the bet you place per round as well. This ranges from its minimum of £0.01 per active pay line, up to its maximum level of £50. Therefore, if you should choose to have everything active at its maximum level, you’ll be able to place a high overall wager of £1000 per spin.

If you manage to spin the game’s logo on to reels one, three and five in any position, you’ll trigger the ‘Live Show Bonus’ round. Here, you get to choose whether you’ll take a musical act, a dancing act or a novelty act on to the show. Spin the wheel to see who will represent you and you could win up to 1125 times your bet placed.

After this, you need to take your act through auditions and the semi-finals for a shot at the Britain’s Got Talent finals. The judges will need to send you through, and the louder the applause in this round, the bigger your prize will be. However, if all the judges reject you, you’ll be going home before the finals.

There’s also a freespin symbol in the game, and if this appears on reels two, four and five, you’ll be granted access to the freespins round. Each of the symbols triggering the round will reveal a number, and these are added together to provide you with your total amount of freespins. There are up to 20 available. Furthermore, during this round, the game’s logo will fly on to the screen and drop wilds randomly onto the reels, which will remain in position for the duration.

Wilds in this game are represented by the Union Jack, and this will stand in for all other icons on the reels, except for the scatters.

To base a slot game around a popular television programme is a stroke of genius, and Ash Gaming have certainly crafted together a wonderful version of this one.