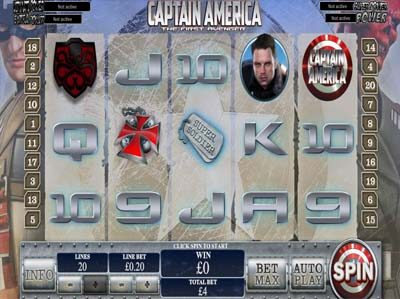 Captain America has been known as one of Marvel’s key superheroes in comic books for some time now, but it’s only been in recent years that he’s come to forefront of many other peoples memories, thanks to the release of several films starring Chris Evans as the titular character. It is, without a doubt, due to the success of these releases, that the games developer, Playtech decided to craft an online video slot based on the same subject. In doing so, they present a game to you with reels filled with icons relating to the movies – namely, one of the hero himself, one of the villain, a couple of badges representing each faction, a dog tag and a red cross symbol.

The game itself is offered up on a five reel and three row layout, which provides a familiar interface for players. There are also 20 separate pay lines included alongside, although these can be customised to suit your own personal preferences. Furthermore, you can also customise the amount of the bet you place each round, which starts from its minimum level of £0.01 and increases up to the maximum level of £5 per active pay line. This offers a high wager of £100 per spin.

There are two wild icons included in the game, one of which is of Captain America and the other is of his red-headed villainous enemy. These will both substitute for their same coloured symbols on the reels, and will also offer up a multiplier of times two. Scatters and freespin icons are not substituted for by the wilds.

And speaking of the scatter, this is represented by the superhero’s shield. This symbol pays out wherever it appears on the reels, with five of them showing up offering a pay out of 300 times your wager placed at maximum bet level.

Furthermore, during the main game, you’re also able to activate the freespins round. This is done by spinning the Captain America wild on to reel one in any position, the freespins logo onto reel three in any location, and the villain wild onto reel five in any position. You’ll be provided with four freespins initially, and you’ll starts the ‘Super Energy Free Games’ round. Here, you can pick up to nine shields for freespin power features, including additional spins of the reels, increasing multiplier and expanding icons.

Not only that, but because this is one of Playtech’s Marvel games, it is also connected to the ‘Marvel Multi-Level Progressive Jackpot’. This can be accessed at any time randomly with any bet placed, and it will provide you the opportunity to win one of four large jackpots!

For a game based on a comic book hero, this certainly provides one of the better options, introducing various special features and additions.