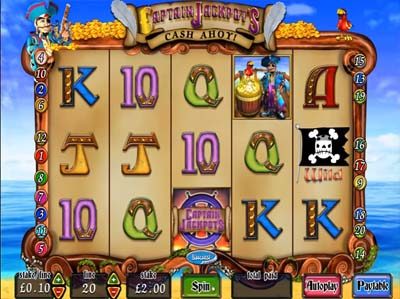 Barcrest Games do tend to be a little bit hit and miss when it comes to their game offerings, but Captain Jackpot’s Cash Ahoy is one of them that has had a little bit more effort added to it. It takes on the pirate theme, which, while overdone in online slots, is still appealing enough on the whole. As such, the reels should incorporate various different theme-relative symbols, although the first ones exist in the form of the regularly seen A, J, K, Q and 10 icons. These have all had a bit of a pirate twist added to them, while the game’s logo provides another standard icon.

The overall layout of Captain Jackpot’s Cash Ahoy is presented on five reels and three rows, so everything is fairly standard as far as this is concerned. The developer has also integrated a total of 20 different pay lines into it as well, but these can be customised by using the relevant arrows next to the ‘Line’ box. You’re also able to alter the amount of the wager around that you play, and this is done by changing the stake per line between its minimum of £0.01 and up to £20. This allows a maximum overall wager of £400 to be played per round.

There are one or two specialities incorporated into this game, starting with the wild icon. This is represented by the skull and crossbones flag, and as a wild it will stand in for any other symbol on the reels in order to form a win, except for the three bonus symbols.

And speaking of these, the first of them is the treasure chest bonus, and when three or more treasure chest symbols come into view in any location, the bonus round is initiated. This sees the Captain kick a chest to see values fall from it. The second one is the pirate ship bonus, triggered by three or more of the pirate ship symbols appearing anywhere. You must then select a ship by clicking on it, which will reveal a value to be multiplied by your wager placed. Finally, the Captain Jackpots Bonus round is triggered by three icons of the very man in question showing up on the middle three reels. Gold, silver and bronze pots will spin around and when they stop, the arrow will point to one of them, revealing your prize.

It’s not the most graphically superior game out there, but as far as Barcrest offerings are concerned, it’s probably one of their most appealing and entertaining games on offer.