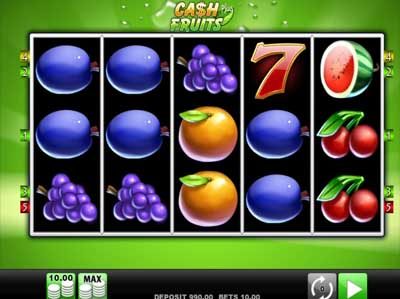 Cash Fruits Plus is a traditional looking slot game by slot game manufacturer Merkur. Like most gaming developers, Merkur has several slots that are designed to mimic the way old slot machines look. Cash Fruits Plus is no exception, as you will see from the very start as soon as the slot game loads. You will be greeted by all the most typical fruit symbols that you see in vintage slots. Starting offer with the lower value cherries, lemons, oranges and plums, they make their way further up in value. Next is the star symbol and after that are the grapes and watermelons. Finally, there’s the red lucky number 7, which offers the highest payouts on these reels.

The layout features the customary 5 reels and 3 rows, with a total number of 5 paylines. The paylines are fixed, so adjusting them won’t be possible. However, you may of course play around with the wager amounts and adjust them to your liking, as well as make use of the autoplay feature. Stakes start at 5p per spin and range up to £10 per spin. The RTP here is typical for most games by this provider – 95.72%.

Special Features in Cash Fruits Plus

You will notice that, as in the majority of vintage styled slot games, this one lacks any real bonus features. Nope, you will be in for a disappointment if you were counting on lavish bonus rounds, with numerous freespins and multipliers or other extras. However, you can benefit from a Scatter symbol, which isn’t present in too many of these games.

The Scatter comes in the form of the Star symbol and while it’s not the highest paying icon on these reels, you can still gain from its flexibility. It can also appear in any position on the reels. But in order to make the best of it, you will need to land at least 3 Scatters during a spin. You won’t find any other special symbols here, however.

The only other notable feature that will spice up regular gameplay is the Gamble feature. If you’re familiar with this concept, then you probably know that most other games will offer you a simple double or nothing side game. Most commonly it involves guessing the color of the top card in a deck of playing cards. A correct guess will double your amount, whereas a wrong one will make you lose it and will end the feature. The Gamble feature in Cash Fruits Plus includes this very same game, alongside another one. And you can choose the one you would like to play! The second option involves climbing a ladder and is based on skills. You can choose to collect the amount you win at any point during the feature.

Cash Fruits Plus is a fairly simple and basic slot game. The graphics are decent and this slot provides a very straightforward gaming experience. It might not be for everyone, though, especially if you’re after bonus features.