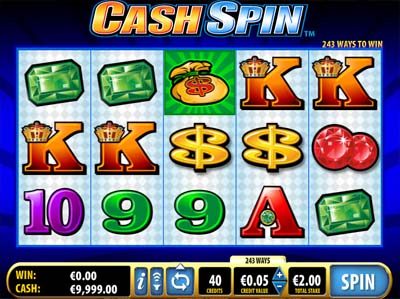 Cash Spin, from Bally Games, is a video slot that merges some of the old with some of the new to make a nicely crafted game. The reels themselves are filled with icons which have been found in many other products before. Alongside the standard A, J, K, Q, 9 and 10 symbols, players will also be presented with a variety of coloured gemstones, from the red, circular ruby to the green, sparkling emerald. There isn’t really any kind of theme incorporated into the game overall, and as such, the soundtrack that has been included is fairly standard.

In addition to this, the game’s layout features five reels and three rows, plus 243 ways to win on top. Players can alter the coin value that they wager with from its minimum of £0.01 up to its maximum of £8, while a set total of 40 coins must be played in every round. Therefore, the maximum overall wager that a player is able to place stands at £320.

There is a wild symbol in Cash Spin, which acts as a substitute for any other on the reels. This will only appear on reels two and four, and the only symbols it doesn’t stand in for are the bonus icons and the scatters.

Three scattered ‘U-Spin’ icons appearing on reels one, three and five will initiate the ‘U-Spin Wheel Bonus Feature’. This rewards you with one spin of the wheel of fortune. Spinning this will then provide you with either a coin reward or 12 freespins of the reels.

Finally, if you spin three scattered money bag icons on reels two, three and four, you’ll trigger the ‘Money Bag Bonus Feature’. This simply requires you to select one of the three bags to reveal its credit value. These awards range from three to 50 times the total stake.

This game offers up a visually decent product with additional extras that provide enough entertainment and boost to your balance under the right circumstances.