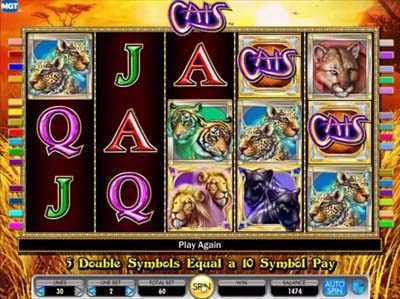 If you’re thinking about furry, purring playmates that would spend most of their time sleeping or running away from dogs, then think again. IGT’s ‘Cats’ game is talking about the big cats. You know, lions, tigers, panthers, leopards and pumas. All of which will appear on the reels as icons alongside the standard A, J, K and Q offerings. There’s an interesting piece of music which plays upon you first loading the game up, which ends with a roar of a cat. However, for the rest of the game, you’ll be presented with generic soundtrack music.

It’s a five reel and three row game offered up by IGT, and a total of 30 pay lines have also been added, which can be customised to suit your own personal preferences. You’re also able to alter the line bet from its minimum of £1 up to its maximum of £30. Therefore, anyone playing this game can place a maximum overall bet of £900 per spin.

There’s a wild symbol included in the game, which is the products logo. This will stand in for all other icons to make a winning combination, except for the scatter icons. This will also provide a double pay out when substituting for any of the five big cat icons.

IGT certainly knows how to work with some themes in general, although the generic slot music doesn’t so so much to propel this one to lofty heights. However, the inclusion of the wilds, scatters and double icons all come together to form a decent enough product.