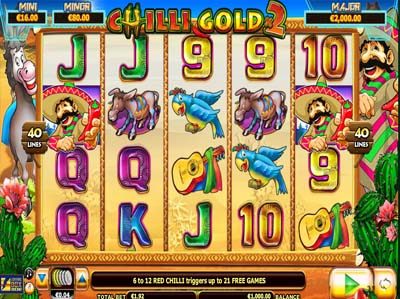 Chilli Gold 2 is a flamboyant slot game by software provider Lightning Box. It’s also a sequel to the fairly popular Mexican themed slot game Chilli Gold. However, this game boasts higher quality graphics and exciting new animated features, which its predecessor lacked. For example, if you hover over the spin button, you will see a red chili pepper do a summersault over the button. Other than that, though, the setting and backdrop are all pretty much similar to the old game. You will see a jolly donkey on one side of the reels, and a happy man in a sombrero on the other. Both of these characters are also present on the reels, as are a guitar and a pair of maracas.

The layout here is just as it was in the previous slot, meaning there are 5 reels and 4 rows. The total number of payouts here is fixed at 40. However, wager amounts start off a little higher here at 48p per spin and reach up to £60 per spin. The RTP isn’t exactly the highest either, and you can expect an average of around 96.32%.

Something that’s unusual about Chilli Gold 2 is the fact that it benefits from not one, but two whole Wild symbols. Yes, and they each offer different features. First is the Red Chilli Wild Bonus symbol. It can only appear on the middle reels 2, 3 and 4. But it will be able to substitute for all other symbols on the reels, without exception. Furthermore, it will also double the payouts of all winning combinations that it becomes a part of. And even that’s not all that it can do. 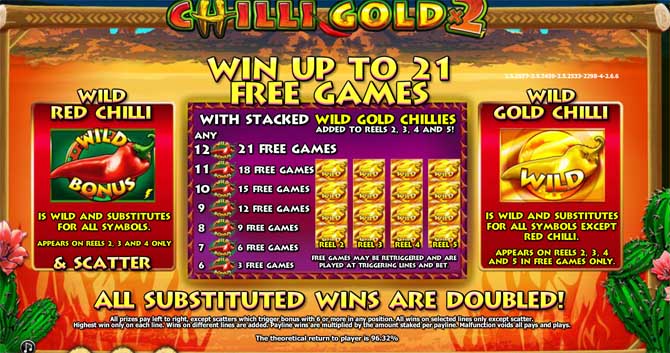 As it is also a Scatter/Bonus symbol, it will be able to trigger the freespins feature that this slot game has in store for you. And in order to do so, you will need to land at least 6 Wild Chilli symbols on the reels during the base game. The more you land – the higher number of freespins you receive. The minimum of 6 Wilds will give you 3 freespins, whereas the 12 Wilds will give you the maximum of 21 freespins. Furthermore, during the freespins you will also benefit from a second Wild symbol – the Gold Chilli Wild. It will appear on reels 2, 3, 4 and 5, and replace all symbols except for the first Wild. It, too, will double your payouts and, what’s more, you can also retrigger this feature by landing more Red Chillis.

And as though that weren’t enough, players can also aim for one of the three available jackpots in this slot. That’s right, the addition of Stellar Jackpot will randomly give you the opportunity to hit the big bucks.

Chilli Gold 2 is a fairly entertaining slot game that offers worthy improvements on the original game. For one, the inclusion of a progressive jackpot already makes this a very appealing slot. But the Gamble feature here also makes for a humbler, but no less attractive aspect.