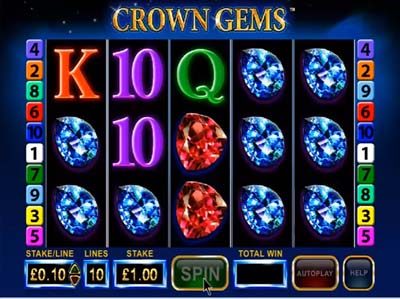 It’s sometimes difficult to differentiate between the range of Barcrest games on offer, so much so that if they didn’t have different titles, we’d be hard-pressed to actually find much of a difference. Crown Gems is one such game, featuring the regularly seen A, J, K, Q and 10 symbols to begin with. These are joined by three gemstones – a green emerald, a blue sapphire and a red ruby, as well as a final icon of a gold crown. It has also had a fairly classic sounding slot game piece of music added to it alongside.

It’s played on a standard five reel and three row interface, and the developer has also included a selection of 10 pay lines into the game as well. Players can adjust the bet value of each spin. This is done by altering the stake per line between £0.01 and £50, meaning that you can play a maximum overall wager of £500 per round.

There aren’t a huge amount of special features included in the Crown Gems game, although one of the additions is the ability to create wins in any adjacent way with the crown symbol. This means that if you gather three of them on a pay line, but it doesn’t start from the left most reel, you’ll still get a pay out for it.

Alongside this, there’s the addition of the Hi-Roller game, and you can trigger this by pressing on the ‘Hi Roller’ button. With this, you’re able to play up to 50 lines for more chances to win, and you’re able to play five of these at a time for a stake of between £20 and £50 per spin.

There’s little that can be said about this game, other than what’s already been mentioned. It doesn’t feature any wilds or scatters, offers up standard graphics and generally, standard gameplay.