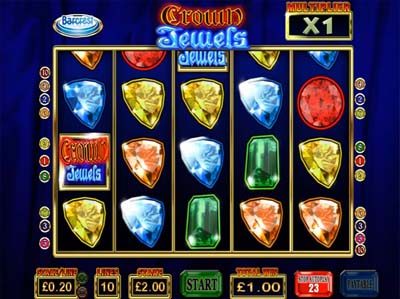 Crown Jewels is almost like some sort of retro arcade-sounding game, as you’ll hear when you load it up and start spinning the reels. It’s nothing specifically outstanding in terms of theme or overall design, although it does manage to provide an entertaining enough game to play. The symbols that have been incorporated into this game are related to jewels that might be added into a crown, so you’ll find that there are various different-coloured gemstones – a blue, purple, orange, yellow, red, green and crystal clear one. The only additional symbol comes in the form of the game’s own logo.

There are five reels incorporated into the game, as well as three different rows, and Barcrest have also added a total of 10 separate pay lines. You cannot adjust these in any way, but you do have the chance to change around the amount of the bet that you place. This can be done by using the plus and minus buttons next to the ‘Stake/Line’ box, and this provides a range of between £0.01 and £25. This allows players to place a maximum wager of £250 per round.

One or two speciality additions have been added to this game, starting with the cascading reels. This comes into effect every time you form a win in the game. All icons included in the win will disappear from the reels and make room for further wins to possibly be formed. With every cascade, the award multiplier will increase, starting from times one and increasing up to times 10.

There’s also the addition of a wild symbol, which is the game’s own logo. This will stand in for all other symbols on the reels, making a winning combination on the paylines. Should five of these appear on a pay line, you’ll win the maximum of 500 times your wager placed.

Its special feature additions might not be as vast as a lot of other video slots, but considering it’s offered up by Barcrest, Crown Jewels is one of the more appealing games in their portfolio. The cascading reels are probably its best feature on the whole, and it’s a relatively easy product to play.