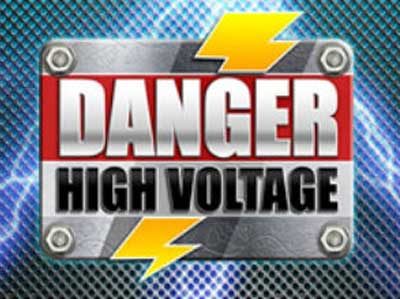 Danger High Voltage is a music themed online slot game by software manufacturer Big Time Gaming. If you remember the 2002 hit song by rock band Electric Six of the same name, perhaps it will make this an even more exciting title for you. The backdrop depicts the bright walls and ceiling of lights in the club. The different colored spotlights are swinging around, further amplifying the atmosphere. Overall, there’s that distinct feel that the band is preparing to come out any moment now and you can almost feel the tension and excitement in the crowd. There’s not much music playing in the background, but you can certainly hear the audience cheering and shouting. And besides that, there’s really not all that much on display here. The transparent reels are floating just in midair, so you can still clearly see the bright lights behind them. 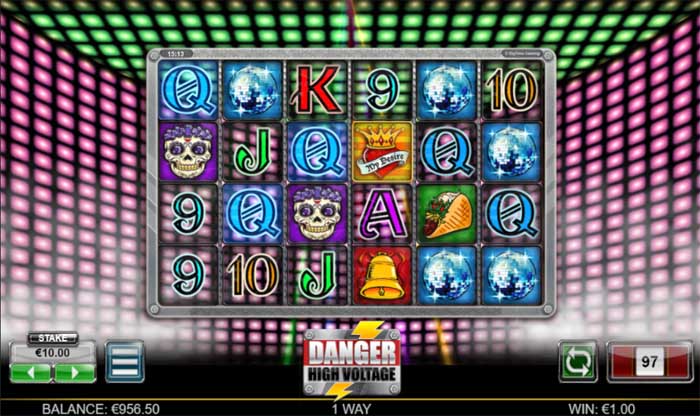 Now for the symbols, they include the lower value playing card icons. Each comes in its own color and they all seem to fit in with the theme pretty nicely. They include A, K, Q, J, 10 and 9. Following them, you will see a number of seemingly random icons. Such are the tacos, the disco balls (alright, that one makes perfect sense in this context) and a gold bell. Last but not least is a skull against a purple background – go figure. It’s also the most lucrative symbol on these reels, offering payouts that are dramatically higher than what the other icons have to offer. The layout in Danger High Voltage is a bit unusual, though, and features 6 reels and 4 rows. In addition, there are a whopping 4,096 ways to win! Needless to say, you won’t be able to adjust any paylines here. Stakes here are pretty liberal, though, and start at 20p per spin reaching up to £500 per single spin. As for the RTP, it’s fairly satisfying at about 95.67%.

Aside from the symbols we already mentioned, this slot game has a number of other special ones up its sleeve. Such are the Full Reel Wilds, for example. They come in two varieties: Wild Fire and Wild Electricity. These can only appear on the middle 4 reels: 2, 3, 4 and 5. Furthermore, they will also act as substitutes for any of the other symbols on these reels to help you create better winning combos. The only exception to this rule is the game’s Scatter symbols, which they will not be able to replace. Another important point to make here is regarding Wild Electricity. For every win it contributes to, it will multiply the prize for it by 6x! 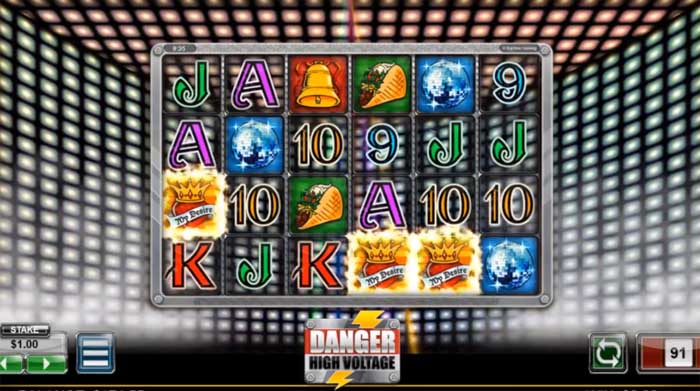 Now, the only other symbol you will really want to be on the lookout for is the My Desire Scatter symbol. It pictures a heart with a crown on it and a “My Desire” label across it. This Scatter can land in any position on any reel, during any spin. But in order to make the most of it, you will need to land at least three of these symbols at the same time. Once this happens, you will get to choose one of the two available special features you will get to play.

One of them is the High Voltage Freespins feature, which will award you a total of 15 freespins. The Full Reel Wilds will also be here to further help you out in creating winning sequences. But better yet, you will also be able to gain various multipliers to boost your prizes. In fact, you can gain 11x, 22x, 33x, 44x, 55x or even a whopping 66x! Last but not least, you will also be able to retrigger this feature an unlimited number of times. 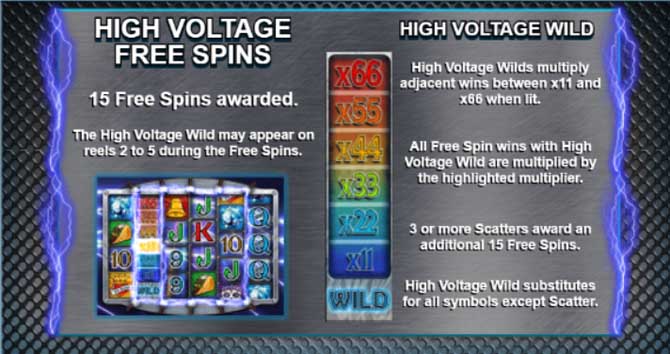 Then we have the second available feature, which is the Gates of Hell Freespins feature. This bonus round will only offer you a total of 7 freespins. However, this feature boasts Sticky Wilds. One of the symbols on the reels will randomly be chosen to become a Sticky Wild for the duration of the feature. This Sticky Wild symbol will only land on reels 2, 3, 4 and 5. And if you manage to line a full reel with Sticky Wilds, you will receive an additional 3 freespins. All in all, you have the potential of retriggering this feature to gain a maximum of 19 freespins total. 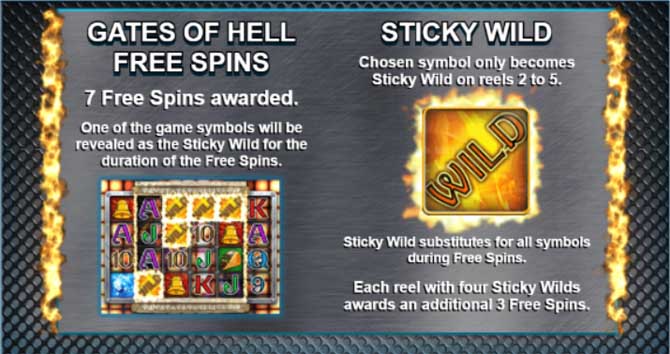 Though not particularly rich in terms of its visuals, Danger High Voltage offers some pretty entertaining features. The abundance of different multipliers you can benefit from both during the base and bonus games are pretty attractive on their own. But also the ability to select the feature you would like to play further adds to the game’s appeal. In addition, they can also prove to be quite lucrative, which doesn’t hurt either. This game is very volatile, so your balance can take a beating pretty fast if you are unlucky. They potential is however enormous, both in the bonus features and in regular game play. There have been several instances of bonus features paying over 5000x