Day of the Dead 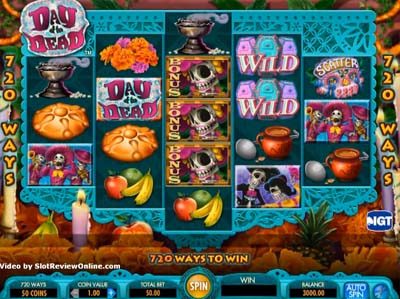 Day of the Dead Slot Review

Reading the title of this game, you might think it’s all about zombies, vampires, ghouls, those kind of supernatural entities. In actuality, this game celebrates the Mexican holiday entitled Día de Muertos. It is celebrated particularly in the Central and Southern regions of the country, and it focuses on gatherings of family and friends to pray for and remember members of the family or close friends who have died. As such, skeletons play a vital role in the festivities, and they’re also a part of the reels of this game. In addition, you’ll find many other thematic symbols, including a bunch of bright flowers, a selection of fruits, a ladle next to an urn-like vase of liquid and a bread loaf. Every spin of the reels comes complete with authentic Mexican music.

The game is laid out with five reels, and its rows are stunted in a 3x4x5x4x3 layout. In addition, the developer IGT has added a total of 720 ways to win as well, and this is not able to be customised in any way. However, players are able to alter the amount that they wager per spin, which is done so via the coin value box and its relevant plus and minus buttons. This ranges from its minimum of £1 up to £5, and there’s an automatic fixed limit of 50 coins to be wagered per round. This offers up a maximum overall wager of £500.

The MultiWay Xtra awards, which accounts for the 720 ways to win, will pay out both left to right or right to left. This is its first special feature.

In addition to this, there is a wild symbol which appears only on reels two, three and four. It is represented by three vibrantly coloured coffins, and should it make an appearance, it will substitute for all other icons on the reels, except for the scatters and bonus icons.

And speaking of the scatters, these are represented by an ornately decorated skull. These pay out wherever they show up on the reels, and any five coming in to view pay out 50 times your total bet.

The bonus icon of the game is represented by a skull with lipstick on it. If this symbol lands in any position on five consecutive reels, the freespins round will be triggered, with an initial total of eight being awarded. If you should be so lucky to hit several combinations that triggers the free spins, you get awarded the sum of the freespins at once. This allows you to earn up to 96 spins. During this round, should five bonus icons appear in any position on five consecutive reels, you’ll receive an additional eight freespins.

Day of the Dead is a great and entertaining product from IGT and will have you smiling with every spin.