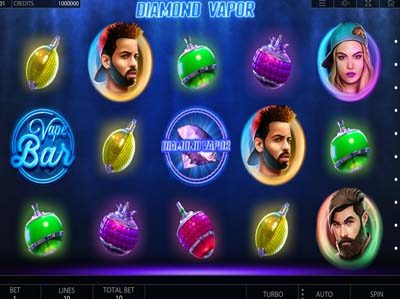 Diamond Vapor is a slot game by popular developer Endorphina that centers on the odd theme of… vaping. Yes, if you thought of something else when you read the title, don’t. The game will greet you with an animated background, with gusts of vapor coming from every direction. It’s a nice combination of blue and purple, setting the perfect contrast for the vapors. Seeing as vaping is the new ‘it’ thing, you will be seeing a number of fashionable young people on the reels. You will see vaporizers in different shapes on the reels, as well. And speaking of that, the developers have actually merged the theme with typical slot machine symbols, including vaporizers shaped as apples, lemons, oranges, grapes and plums.

The layout of Diamond Vapor features 5 reels and 3 rows. There is a total of 10 paylines, however, those are not subject to adjustment. You can count on an RTP of about 96%.

The Scatter and Wild are one and the same symbol in this slot game. The symbol says Vape Bar on it and it can appear in any position on the reels. Furthermore, it can replace any of the other symbols in order to help create winning combinations. And in addition, it can also trigger the freespins bonus game. To do so, you will be looking to land at least 3 Scatter symbols anywhere on the reels. This will award you 10 freespins.

But that’s not all. During the freespins feature, any symbol that appears in a winning combination will expand to cover its whole reel. This will increase your winning opportunities and what’s more – you can also retrigger the freespins feature for an extra 10 freespins. You will again need to land at least 3 Scatters anywhere on the reels.

This slot also features a Risk game, which you will notice every time you spin a winning combination. You will have the option of either collecting your wins or risking them for the opportunity to double them up to 5 times. When opting for the Risk game, you will need to choose between two Vapers – Jack and Mike. Depending on whether or not your Vaper has more vapor than the competitor, you will either double your wins or lose them altogether, ending the game.

Diamond Vapor is an interestingly innovative game with and a pioneer in this particular theme. Whether or not you’re a fan of vaping, you are still likely to enjoy the unique risk game and its sleek and modern design. In addition, those freespins are an attractive a bonus feature as any, so be sure to make the most of them.