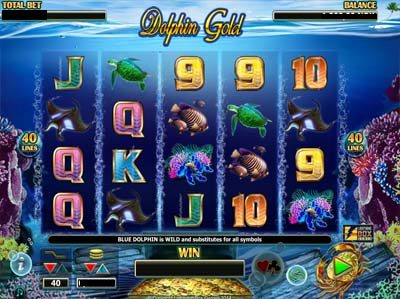 Dolphin Gold is a slot game by developer Lightning Box, which offers an amazing visual experience, coupled by authentic sounds. This game will immerse players in an underwater world that seems almost freakishly realistic. It will submerge you below the surface of the ocean and open up a realm of coral reefs and their numerous different inhabitants. You will get to see sting rays, colorful fish, sea turtles, shrimp, crabs and much more. The sound effects here include the sound of the waves, dolphin calls and water bubbled. Typically for this developer, the spin button offers its very own entertainment, as it comes in the form of a crab. But aside from all the lovely marine life, we have neatly styled playing cards symbols here, too. In fact, they very much look like they have fish scales on them.

As far as the setup here goes, Dolphin Gold features 5 reels and 4 rows. There are 40 paylines here in total, but you may use the controls on the screen to play with less. Stakes can range from 40p per a single spin up to £80 per spin. And as for the RTP, it’s at about 95.3%.

Dolphin Gold has a Wild symbol, which is also its Bonus and Scatter symbol – all in the same icon. It represents a dolphin jumping through a hoop. What’s more, it can also replace any of the other symbols on these reels, without any exceptions. However, it is rather limited in the sense that it can only appear on the middle reels 2, 3 and 4. But for that it also compensates in another great quality. For any winning combination it partakes in, it will double the payouts.

And as this is also the Scatter symbol on the reels, you can also expect it to trigger a bonus feature. In fact, the bonus feature involves a round of freespins. To trigger them, though, you will need to land at least 6 Wild Dolphin symbols, which will award you the minimum of 3 freespins. You can win more freespins, if you land more Scatter/Wilds. The most you can count on here is 21 freespins, which you can get for landing 12 Wilds.

And in addition to gaining freespins, players will also benefit from a second Wild symbol. The Gold Dolphin Wild will come to aid the regular Wild and will appear on reels 2, 3, 4 and 5. And what’s more, you also get to retrigger the freespins feature by landing more Scatter/Wilds. But in case you feel like you’re not getting enough from the base game – take advantage of the Gamble feature. It will provide you with the opportunity to double your winnings after any successful spin – up to several times!

If you are looking for a good marine themed slot game, Dolphin Gold is certainly among the better ones out there. The design and high quality graphics, in combination with the rich bonus round makes this a desirable game to play.