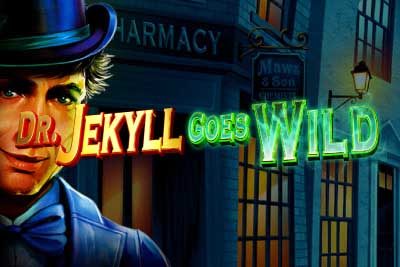 The famous gothic novella by Robert Louis Stevenson has easily made its way into popular culture through movies, comic books and other works. And now software developer Barcrest has also made sure it makes its mark in the world of online gaming. Dr Jekyll Goes Wild offers a really atmospheric setting, taking you directly to the dark streets of 19th century Edinburgh. There’s a distinct air of mystery and tingling fear, and it’s absolutely precious. Aiding it is also a very dramatic soundtrack, which really adds an extra layer of excitement to the overall vibe. The intensity of visuals helps, too. Although the graphics quality isn’t quite breathtaking, it does a perfect job in this context. A neat touch is the fact that the reels are semi-transparent, so you can see perfectly through them onto the cobblestone street, with the shops on houses lining it. 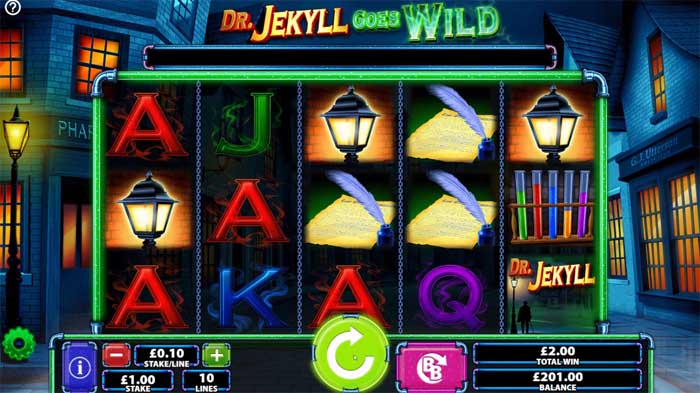 As for the symbols here, they are equally charming. First in line are the lower icons. And though they come in bright colors, they are very much in line with the theme. There is a strange mist surrounding them and they are the symbols A, K, Q, J and 10. Following them we have symbols depicting a piece of paper and a quill, as well as a number of test tubes. There is a lamp post, following which is a tall building and the full moon shining down on it. And finally we have the most lucrative symbol, showing a lone Dr Jekyll in the middle of the night. The layout in Dr Jekyll Goes Wild features 5 reels and 3 rows, with only 10 paylines. The paylines are fixed, so you can’t regulate them. And stakes here are in a very reasonable range from 10p per round up to £500 per single spin. And depending on the mode and betting amount you decide to play on, you can count on an RTP of anything between 94.2% and 98.2%.

Dr Jekyll is the game’s Wild symbol. And as such it will replace all other icons on the reels. That way it can potentially help you create even better and perhaps even more lucrative winning combos. Aside from that, it can only land in any position on the screen. However, the Wild will not be able to substitute for the game’s Scatter symbol. It, in turn, can also show up in any position on the reels. And it comes in the form of the dual symbol of both identities: Dr Jekyll and Mr Hyde. Unlike the Wild or any of the other symbols, though, it doesn’t offer any payouts of its own.

Instead, it has the capacity of triggering this slot game’s Jekyll freespins bonus feature. As a result, you can gain a certain number of freespins, depending on how many Scatters you landed. The minimum number is 3 Scatters during the same spin. These will award you a total of 10 freespins, whereas 4 and 5 Scatters will give you 15 and 20 freespins, respectively. Landing two or more Dr Jekyll Wilds during this feature will retrigger it, awarding you additional freespins. 2 Wilds will award you 3 extra freespins. 3, 4 or 5 will award you just as many as in the base game. 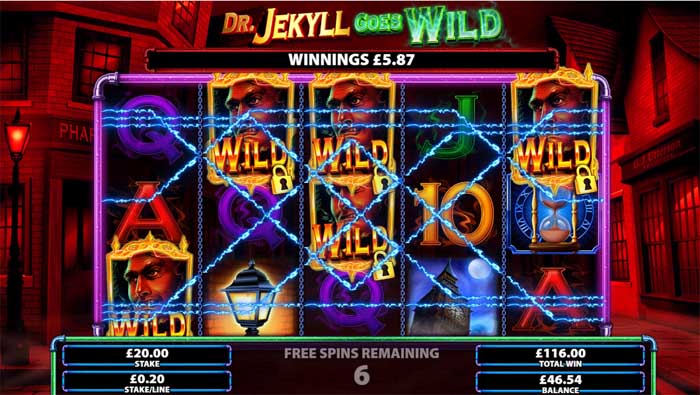 In addition, during this feature you will also see a new symbol, which can only land on reel 1. This is the green potion icon. If you land it alongside a Wild symbol during a spin, this will activate the Hyde freespins feature. The freespins will keep going until you land a san timer symbol on reel 5. And even then it can still continue the freespins, or it can return you to the Jekyll freespins. Note also that during the Hyde spins, all Wilds will lock in place for the remainder of the feature.

Last but not least, let’s also not forget about the hallmark Barcrest feature – the Big Bet mode. As part of it, you can buy 5 consecutive freespins for the price of £20, £30, £40 or £50. Each amount comes with different extras. Among them is the 10-position trail, which can award you up to an impressive 75 freespins.

Dr Jekyll Goes Wild is certainly an entertaining online slot game, with a very dark, but very exciting atmosphere. Gameplay is rather straightforward and really less complex than what we see in most other slots by this developer. In addition, the slot’s medium variance is sure to offer you a fair chance at triggering the game’s bonuses at decent intervals. Furthermore, there’s also plenty of winning potential here. In fact, players can count on a maximum of up to 500 times their total stake on a single spin.