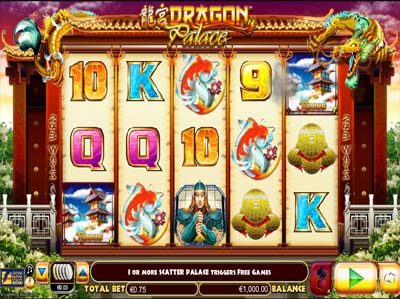 Dragon Palace is an Asian themed slot game by software developer Lightning Box Games. It features a rather traditional Chinese setting, where the reels are ‘inside’ a Chinese palace that is guarded by a ferocious golden dragon. You will notice the developers have also added some neat animated touches, like the dragon’s tail waving over the reels. Chinese themes aren’t exactly anything new in the world of online slot games. So, you will be seeing a fair share of traditional imagery, which you have probably seen in other games in this genre. Such are, for example, the gold coins, the koi fish, the dragons and a Chinese warrior. Certainly, the lower value playing card symbols are also present in this game and have an interesting scaly feel to them.

The layout is also fairly common, featuring 5 reels and 3 rows. There are 243 ways to win and you can enjoy a betting range starting at only 25p per spin. The maximum amount you can bet here is £125 per spin and you can easily regulate the coin value with the controls just below the reels. Your average RTP here is about 95.58%.

The Dragon symbol in Dragon Palace is the slot game’s Wild. As such, it has the capacity to replace any of the other symbols and create winning combinations for them. However, it can only appear on the middle reels 2, 3 and 4. In addition, the only symbol that it has no jurisdiction over, so to speak, is the game’s Scatter symbol. 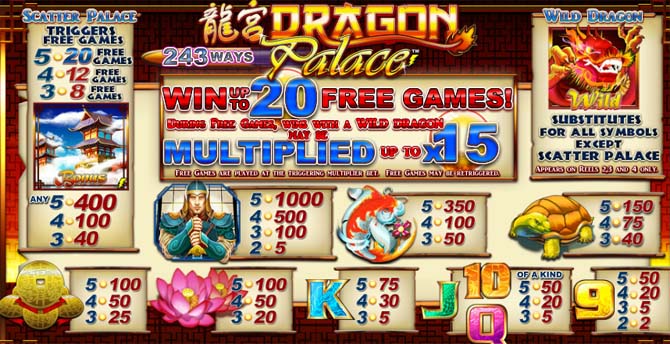 The Scatter, in turn, pictures the palace and offers the second highest payouts on these reels, after the warrior symbol. Furthermore, it is also responsible for activating this slot game’s bonus feature. If you can land at least 3 Scatter symbols in any position on the reels, you will not only receive payouts for them, but also freespins. Three Scatter symbols will give you a total of 8 freespins, whereas 4 Scatters will reward you with 12 freespins. You can receive the maximum number of 20 freespins for landing 5 Scatter symbols.

And during the freespins bonus feature you will especially want to watch out for the Wild. Every time it partakes in a winning sequence, its payouts will be subject to the Dragon Multiplier. After the spin in question, the Master Dragon will breathe fire across the screen to reveal the Dragon Multiplier. It can be 2x, 3x, 4x, 5x, 10x or 15x. What’s more, you will also get the chance to retrigger the freespins feature, by landing another three or more Scatters. That way you can gain as much as 40 freespins!

Dragon Palace isn’t exactly the most thrilling slot game, but its medium variance makes for a nicely balanced gaming experience. The most wins can, of course, come from the bonus round. However, the Gamble feature will allow you the opportunity to maximize your prizes in the base game, as well.