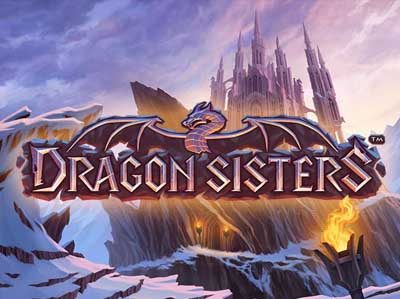 Dragon Sisters is an online slot game by software developer Push Gaming. If you happen to be into fantasy, RPGs, dragons and that sort of stuff – then this slot game will be sure to impress you. The first thing that threw us off when the game loaded was the soundtrack. It’s not just some generic-sounding electronic compilation of notes, but an actual grim, ominous and foreboding even music in the background. It really helps set the vibe and adds that necessary layer of gravity to a game in this genre. The backdrop shows a tall castle carved into a rock cliff, with torches burning by the entrances. So, wherever it is, you can tell it’s important. What’s more, the reels here are semi-transparent, so you can actually look through them and still see the sharp cliff edges and the huge castle. 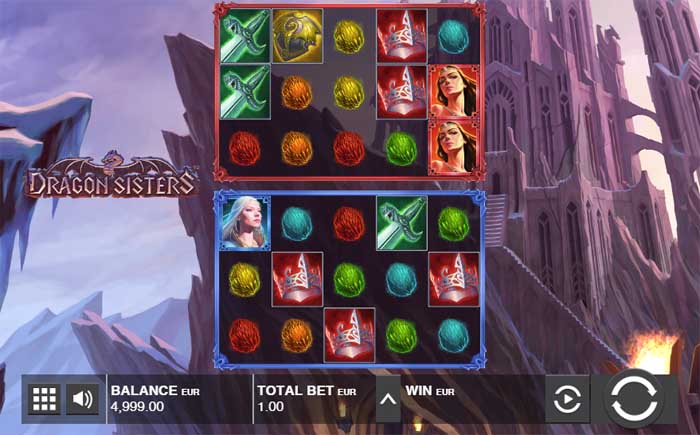 The symbols on these reels further add to the overall fantasy-game feel of Dragon Sisters. And as a matter of fact, we can’t escape the impression that this game was to some degree inspired by the very popular HBO series Game of Thrones. The lower value icons here are different colored dragon eggs. They come in blue, green, yellow, orange and red. Moving on to the higher value symbols, we have some weaponry in the form of a spear and a sword. Then there’s a golden shield, following which is a crown icon. And last but not least we have the two character and titular symbols: the Dark and Light dragon sisters. The next point of interest in this online slot game is the layout. Notice that there are two sets of reels on the screen, each featuring 5 reels and 3 rows. There are 25 paylines here, and these are fixed. So you can’t regulate them. As for the betting range here, stakes span from 25p per spin up to the maximum of £100 per single spin. In addition, the RTP is also pleasantly high at about 96.73%.

So, let’s now have a look at the game’s special symbols. First in line is the Wild, which you will have a hard time missing. It can appear in any position, on any of the two sets of reels. And it is also among the most lucrative symbols here, offering the same payouts as the Dragon Sister symbols. It will also be able to substitute for any of the other symbols here, thus helping create more winning opportunities for you. There are, however, only two symbols that the Wild will not be able to replace. Those are the Red Dragon and the Blue Dragon icons. 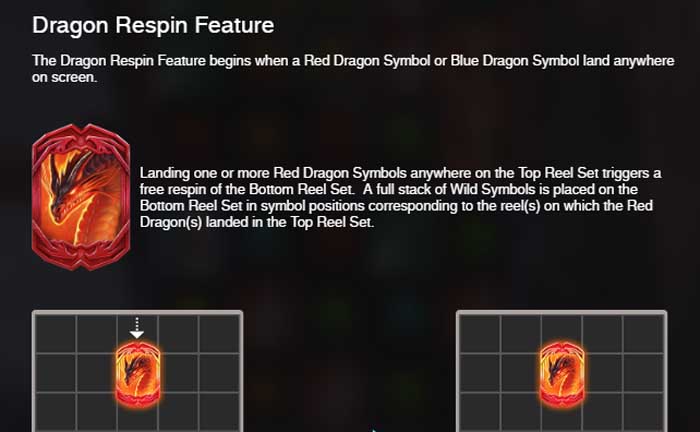 The Red Dragon, along with the game’s Dark Sister symbol can only appear on the top reel set. Likewise, the Blue Dragon symbol and the Light Sister can only land on the reels of the lower set. Both Dragon symbols can trigger the Dragon Respin feature. And in order for this to happen, it will be enough to land only one of either of those during a spin. For example, if you land a Red Dragon on the top screen, the respin will occur for the bottom reels. But what’s more, Wild symbols will also cover the reel on the bottom screen corresponding to that, on which the Red Dragon has landed on the upper set. 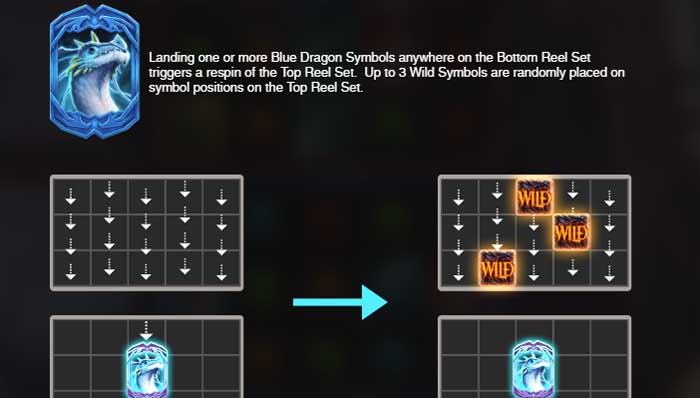 As for when the Blue Dragon lands on the bottom set of reels, things will be similar but slightly different. This will trigger a respin for the top reels, however, there will be three Wilds added to them in random positions. Furthermore, all the Wild symbols will also remain in place for the duration of the respin. And if as a result of it you also land another Dragon symbol, then another respin will take place. Hence, the feature will end when no other Dragon icons land on the reels. This will also be the only special feature in this online slot game, so don’t expect any freespins or pick me games. It’s an unusual structure, we’ll give it that. And likewise it’s only fair for the special feature to also be a bit different. But whether or not this is actually something for you is up to you to decide.

Dragon Sisters certainly does offer a very compelling atmosphere, with the sophisticated soundtrack and graphics worthy of a good RPG game. And it’s also very unusual in that it offers two sets of reels instead of one, as well as a slightly different kind of gameplay. To some, it may appear to be a bit bland in terms of its features. But for what it’s worth, you will at least be able to trigger the one bonus round here fairly often. That’s also on top of the fact that this is actually a medium to high variance slot game.