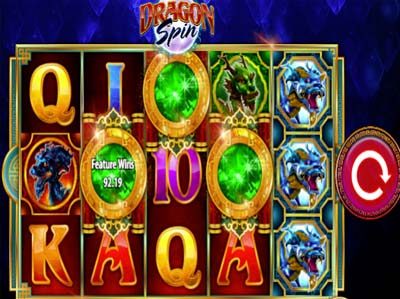 Dragon Spin is an Asian and dragon themed slot game by manufacturer Bally. The graphics aren’t quite up to standard and the corny soundtrack doesn’t seem to make much sense here. The backdrop features luminescent blue diamond shaped objects above the reels. And the developers have included the usual low value playing cards: A, K, Q, J and 10. Each has its separate color and following them are the character symbols. All of them are different dragons, starting with the Green Dragon and making their way up in the hierarchy past the Purple, Blue and Red dragons. There are discreet animated features here and there, to mark winning combos for example, which adds a nice touch.

The symbol with the highest payout is the game’s Wild symbol, offering payouts of up to 100 times your line bet. It can appear in any position on the reels and will replace the regular symbols in order to create winning combos. However, it cannot replace the Bonus symbol, which appears in the shape of a mysterious green gemstone.

Though it may not look like it, this slot actually has a variety of different special features. Such is, for example, the Mystery Stacked Reels feature. Each of the reels has stacked mystery symbol positions. These will become two or three random symbols, which will happen for each spin. This will automatically increase your chances of scoring bigger wins for those respective symbols.

Now, back to the Bonus symbol. By landing three or more of it at a time, you will trigger the Dragon Spin Bonus. A wheel will spin to award you one of the three available freespins features. First is the Raining Wilds feature, which will give you 5 fresspins, during each of which you will get anywhere from 3 to 10 Wilds randomly added to the reels. Next is the Persisting Wilds feature, which will also reward you a total of 5 freespins. During this feature, any Wilds that appear on the reels will remain in place for as long as the feature lasts.

Last but not least is the third and final feature – the Reel Blast. Like the previous two, it will award you 5 freespins, which will be played on 3 sets of reels for a total of 90 paylines. The 3 sets will share a Reel Blast center reel that will include reels 2, 3 and 4 on all sets. The symbol that appears on that Reel Blast center reel will be the same everywhere. So this can make for some massive wins.

Dragon Spin doesn’t bedazzle with super graphics or high-quality animated sequences. But the abundance of bonus features might make you want to consider trying this medium variance slot.