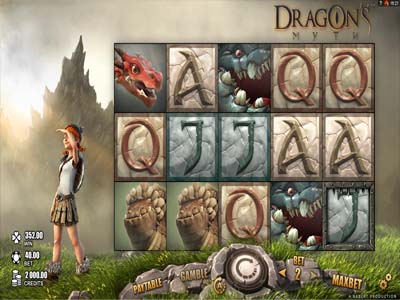 Have you ever fancied going in search of dragons? Ever been compelled by the myths of their existence? Well, now you can go on a search for them in the Dragon’s Myth game, brought to you by Rabcat. This adventure will see you spin the reels atop a mist-covered mountain, and the icons incorporated into the game are, of course, those of various dragons. And ferocious looking dragons at that. It seems a little odd that a young girl is the only person accompanying you on this journey, but she’s nicely animated along with the rest of the game.

There’s a five reel and three row interface to play on, and a total of 20 paylines alongside. The game’s coin value is able to be altered between £0.01 and £2.00 per line, offering up a maximum overall wager of £40 per spin. After every win, you also get the chance to gamble your winning, which asks you to choose between two dragon eggs. Should a dragon pop out from the chosen one, your winnings are doubled.

The young ginger girl, also has an icon that appears on the reels, and she is a wild symbol. She’ll stand in for other symbols to create a winning combination, with the exceptions to this being on freespin, bonus and shoot symbols.

You’ll also see that the main game has a cage around the bottom of reel five. You’ll need to catch all four dragons (which will happen if a dragon symbol stops in the caged area) to collect the Dragon Bounty. The spin button will illuminate in a corresponding colour every time a dragon is caught.

The fiery mountain represents this game’s freespins symbol, and is also a scatter icon. Three of these will provide you with 10 freespins, four will give you 15 freespins and five will offer up 20 freespins. During the freespins round, a win-both-ways feature is also activated, and there’s also the inclusion of a bonus symbol.

If you spin the bonus symbol during freespins, you’ll reach the legendary dragon’s cave, providing you with three more freespins. Winning chances can be instantly raised by one wisely placed fixed wild symbol. Every further triggered shoot symbol results in an additional three freespins and another free placeable fixed wild.

Dragon’s Myth is both visually appealing and features enticing gameplay. The added extras in this online slot machine are marvellous and will keep you coming back for more.