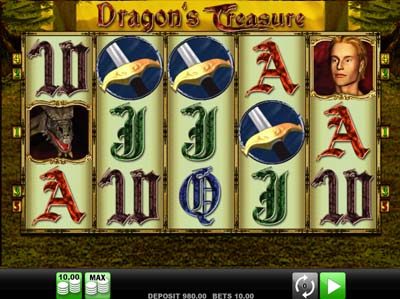 Dragon’s Treasure is an exciting video slot by software provider Merkur. The game centers on a medieval theme – one of danger, adventure and brilliant rewards. As you can tell from the title, you will be competing for the dragon’s treasure chest with none other than the fearful dragon himself. Set against a backdrop of a forest-like wilderness, the game already prepares you for the thrill you’re about to experience. The symbols on the reels start off with the regular, lower value playing card icons. They are styled to resemble gothic script, which makes for a nice touch, and include A, K, Q, J and 10. Following them is part of a knight’s sword and the large treasure chest. Finally, there are two character symbols, both male. One is dark-headed, and the blonde, proud looking one is the highest value symbol on these reels.

The setup and layout of Dragon’s Treasure are rather customary, with 5 reels and 3 rows. The game only has 5 paylines, as you will notice. And while you won’t be able to regulate them, you will have full control over your stake amounts. Bets can range from as little as 5p per spin and up to £10 per spin. The RTP is at around the 96% mark.

Dragon’s Treasure features one special symbol, which acts as both the Wild and the Scatter at the same time. It comes in the shape of the dragon, of course. And as any Wild should, it can replace any of the other symbols – no exceptions – to help contribute towards winning sequences. Furthermore, you can also count on it landing in any position on the reels, which further increases winning opportunities. 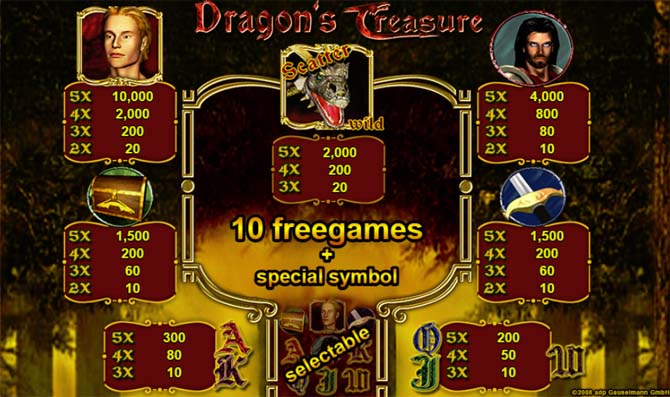 But as it is also the Scatter symbol in the game, it is responsible for triggering the most important feature. And that feature is the freespins bonus round. To activate it, you will need to land at least 3 Scatter/Wild symbols anywhere on the reels. This will reward you with a total of 10 freespins. However, before they begin, you will need to choose one of the regular symbols to become a special symbol. Then, any time it becomes part of a winning combo during the freespins, the entire screen will become covered in that exact symbol. Thus, you can gain some pretty fantastic wins.

In addition, this slot game also features a Gamble feature, offering you two double or nothing games for higher wins. After each winning spin, you can choose to either collect your prize or gamble it. Furthermore, you can gamble it in the familiar side game of guessing the correct card color or you can select a skill-based game.

Dragon’s Treasure certainly offers the necessary dose of excitement, especially thanks to the complex gamble feature. However, the freespins is really where all the fun is at, with the possibility of scoring attractive prizes of up to 1,000 times your total stake!