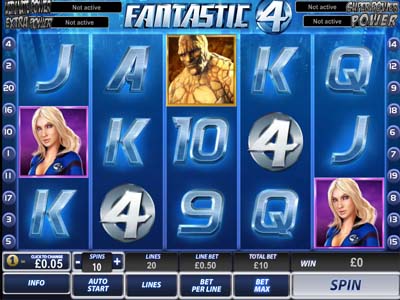 The Fantastic Four slot created by Playtech takes all the thrills and excitement of the comic book heroes and integrates it into a visually appealing game. The soundtrack included with the game can come across as a little cheesy at times, but overall, fans of the comics or the films will be exceptionally pleased with the gameplay. The reels feature all four characters – Mr. Fantastic, The Human Torch, The Invisible Woman, and The Thing. The rest of the symbols are made up of standard slot game symbols, A, J, K, Q, 9 and 10.

The layout offers up a five reel game with three rows, while a total of 20 paylines have also been integrated. The amount of active lines can be altered to the players preferences, as can the coin value. This begins from the minimum of £0.01 and can be switched up to the maximum of £2.00 per active payline. This allows a total overall maximum wager of £400 to be placed across all 20 paylines. An autoplay button is also included.

The Fantastic Four symbol acts as the game’s wild symbol, substituting for all symbols, except for the scatter icon.

The game also has a multi-level mystery progressive jackpot as part of all Marvel Slots. There are four progressives included altogether, from the Power, to Extra Power, to Super Power, to Ultimate Power. All jackpots are won at random.

Fantastic Four is a great game, created by Playtech and playing off the success of the comic books and films perfectly.