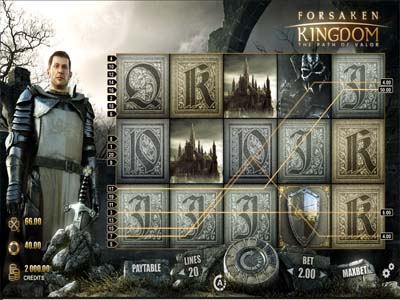 Forsaken Kingdom is a wonderfully animated game from Rabcat, providing you with the opportunity to partake in a quest alongside a brave and daring knight. You’ll find reels filled with icons of Gothic castles, a sword trapped in a crevice, the knight himself, and what would appear to be his demonic enemy. Symbols of 10, J, K and Q make up the remainder, and a very adept soundtrack will compel you through the game, alongside special effects noises of screeching crows and trotting horse hooves.

The game provides players with a five reel and three row layout, as well as offering up 20 customisable paylines. The coin value can be changed between the game’s minimum of £0.01 and the maximum of £2.00 per line, giving all players the opportunity to place a maximum overall wager of £40 per spin.

The reels contain shield symbols, and you’ll need to collect these as you go in order to generate knights of the round table. These can be collected by spinning at least two shield icons on the reels, and collected knights will then show around the spin button – shaped as the round table.

Should you spin three shield symbols anywhere on the reels, you’ll also trigger between five and 12 freespins.

Once you’ve collected all 12 knights of the round table, you’ll activate the game’s bonus round. The value of each knight depends upon the played number of paylines and chosen wager. As the bonus round is triggered, the arithmetic average of all collected knights, known as the bonus bet, will be multiplied by the won ‘Table Multiplier’.

Finally, the wild symbol is represented by Lady Guinevere, and this stacked symbol will substitute for others to create a winning combination, with the exception being scatters. Spinning King Arthur and Guinevere on the top row of the reels and you’ll trigger an instant ‘Eternal Love’ bonus. Alternatively, spinning King Arthur and the black knight on the top row will trigger an instant ‘Epic Battle’ bonus.

Forsaken Kingdom provides a uniquely adventurous game with enough extras to last a lifetime. The RTP is also at a quite respectable 96,54%.