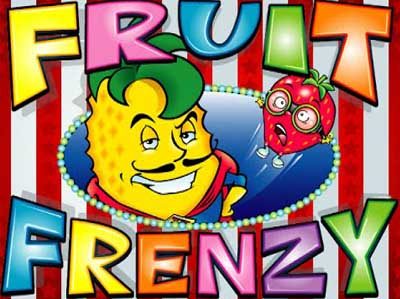 Enter the carnival, where all the attractions and entertainers are actually fruit! Fruit Frenzy is an online slot machine by software provider RTG that has a really fun vibe to it. The backdrop is purple with lighter colored stars scattered all across it. The graphics here have a clearly cartoonish quality, but nothing over the top. It’s not the newest slot on the market either, so it lacks much of today’s pizzazz and flashiness. There are no 3D visuals, animated sequences or anything like that. In addition, this title doesn’t really feature a soundtrack either, besides for the short melody of an out of tune piano marking winning sequences. But if it bugs you, you can always just make use of the controls to mute the sound. The more interesting part of this game is its symbols. 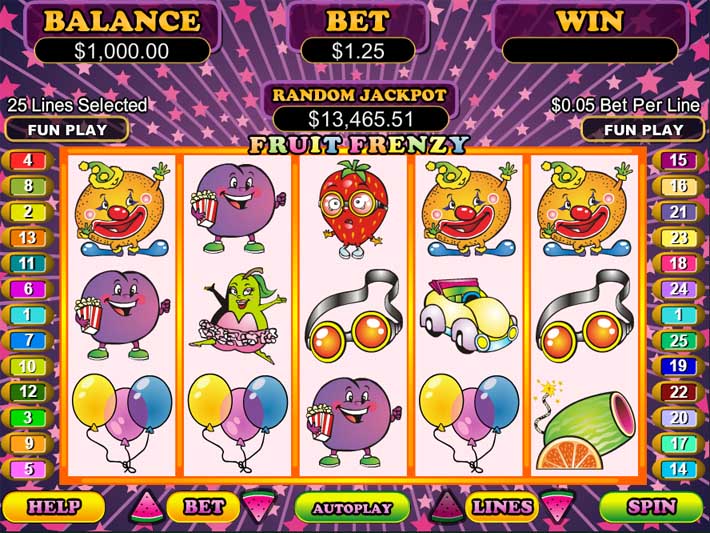 These don’t have the boring old playing card icons among them. Instead, they start with three different thematic icons, all offering the same payouts. These are a pair of tickets, following which we have some orange goggles and three balloons. Next, only slightly higher in value, we have a little yellow bumper car symbol and a symbol depicting a canon. Only it’s a watermelon canon with an orange slice for a wheel. This brings us to the higher value icons on the reels, of which there are also 5 in total. First is the plum holding a box of popcorn, after which is the banana in a tuxedo and a top hat. Then there’s a pear ballerina, and an orange that is a clown. And last but not least is the strawberry symbol, offering payouts of up to 5,000 coins. As for the layout in Fruit Frenzy, there’s nothing unusual here. It features a grid of 5 reels and 3 rows, with a total of 25 available paylines. You can also play with less paylines, if you would like to. Just use the watermelon slices below the reels to regulate the active paylines, as well as the betting amounts. And speaking of them, stakes here range from 25c per spin up to a total of $125 per single spin.

Look out for the sleek pineapple symbol, as this is the game’s Wild symbol. It’s also the most lucrative icon on these reels, offering payouts of up to 10,000 coins. In addition, the Wild will also be able to substitute for any of the other symbols on these reels. And in doing so, it will be able to increase your winnings and help complete winning sequences. What’s more, you can also expect it to land in any position, anywhere on the five reels. There is one symbol that the Wild will not be able to replace in this game, though, and that’s the two Scatter symbols.

The Scatters here come in the form of the game logo: one is Fruit and the other – Frenzy. Both aren’t particularly lucrative in terms of their value. But they can also both appear anywhere on the reels and offer scattered payouts. 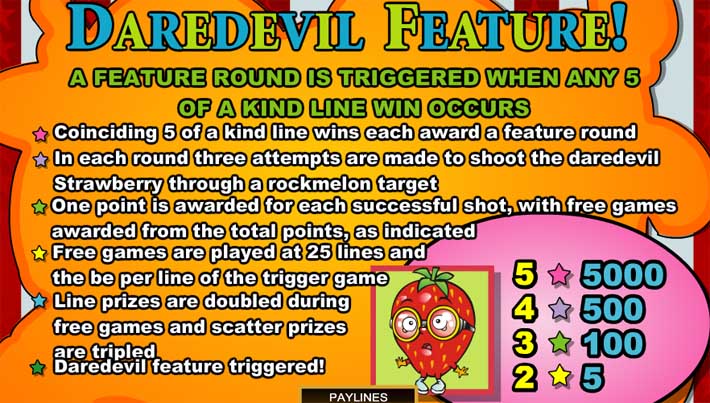 The main attraction in Fruit Frenzy, however, is the Daredevil Feature. This is a fun, interactive bonus round and triggering it doesn’t quite work the way it does with conventional bonus features. Here, you will need to land a winning combination with five symbols of a kind in order to activate the bonus round. As a result of this, you will enter a new screen and will have to shoot the Daredevil Strawberry with the watermelon canon through the Rocketmelon target. For every successful shot, you will receive a certain number of freespins. So, aim well, as this will give you more freespins.

Then, once you are done firing your shots, the freespins will begin on a brand new set of reels. All throughout the duration of the bonus feature, you will also benefit from a 2x multiplier on all your winnings. And what’s more, all Scatter wins will enjoy a 3x multiplier! In addition, you can also retrigger the feature and gain even more freespins. Last but not least, keep an eye on the game’s Progressive Jackpot as well. It’s on display just above the reels. And who knows? Maybe you will be the lucky player to win it after a given spin.

Fruit Frenzy is without a doubt a very fun online slot game. And it’s also suitable for new players, but seasoned players will be sure to enjoy it just as much. This is a low variance offering from RTG, meaning you will get to land winning sequences pretty often, but in smaller portions. There’s a very flexible betting range, catering to every pocket size. But more importantly is that this title boasts simplistic gameplay, with an exciting bonus feature. It’s refreshing that the developers have come up with a different way to trigger the bonus round.