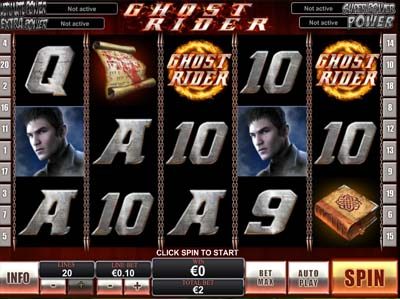 In the dark of night, where hell and earth meet, an unlikely hero will hunt evil down…

And according to this game from Playtech, that hero is Marvel’s very own Ghost Rider. Yes, this game is centred on the action hero himself, and it brings a whole host of adventure to your screen, with exciting visuals and appealing special features. The reels themselves are filled with icons of the Ghost Rider himself, in both human and supernatural form. There’s also a spellbinding book, a scroll which is marked with blood, and a horn-headed demon figure. These icons are all accompanied by the regular A, J, K, Q, 9 and 10 symbols.

There’s a total of five reels and three rows included in the game, as well as a total of 20 pay lines. These can be customised if you have a preference for wagering on a specific amount. Meanwhile, players can also change the line bet, which is done by the plus and minus buttons underneath the amount already shown. This begins from its minimum value of £0.01 and increases up to £5 per line. In total, you’ll be playing a maximum overall wager of £1,00 at this level. There’s a ‘Bet Max’ button incorporated to allow you to get to this level instantly, and an ‘Auto Play’ button to allow up to 99 consecutive spins of the reels at the same bet amount.

The icon of the flaming skull acts as the wild symbol for this game. It will substitute for any other symbol on the reels, except for bonus icons and scatters. During the freespins round, this will work as an expanding wild, which will cover reels two, three and four if it should make an appearance.

The scatter symbol is this game’s logo, which will pay out wherever it appears on the reels. Should five show up, you’ll be on the receiving end of a pay out of 100 times your bet placed. Three or more of them making an appearance will provide you with 10 freespins, which also includes a multiplier of times three.

The ‘Ghost Hunt’ feature sees you hunt down 10 different ghosts for cash, and this round is activated when a bonus icon shows up in the centre position of a reel, and all five reels include the same. Some of the ghosts can escape your grasp, but a minimum of seven ghosts will be caught and hunted down by you. After 10 picks, your wins are added up, and you exit the bonus round.

The ‘Marvel Multi-Level Mystery Progressive Jackpot‘ is also able to be accessed via this game. Any spin, no matter the coin value, can trigger this bonus.

Ghost Rider provides a wonderful take on the Marvel comic book hero, presenting many rounds of special features and intriguing graphics along the way.