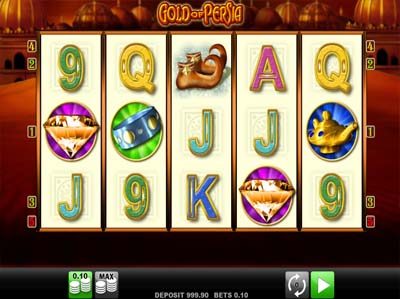 Gold of Persia is quite obviously, as you can tell from the title, a Persian themed slot game. It’s brought to us by software provider Merkur Gaming and is therefore also a very volatile slot game. The reels depict a number of different images we associate with the Middle East. And the backdrop also pictures a traditional city scape with the typical gold domes, reflecting the light of setting sun. As for the reels, they also include the lower value playing card symbols. They feature A, K, Q, J, 10 and 9. Following them are the exaggeratedly pointy shoes and the gong. Then there’s a ring, a golden lamp and a diamond. And finally, there are also 2 character symbols, but more on them in just a bit.

The setup of Gold of Persia is pretty standard for most Merkur games, featuring 5 reels and 3 rows. There are 5 paylines in total, but they’re fixed, so you won’t be able to regulate them. Nevertheless, you have the benefit of a low wager range of between 5p per spin and £10 per spin. Finally, the RTP is also the same as most other games by this provider – 95.97%.

Special Features in Gold of Persia

The two character symbols are also the two special symbols in this slot game. First up is the male character in the blue cloak. He happens to be the Wild symbol on these reels and can therefore substitute for any of the lesser value symbols to contribute towards winning combinations. He can also appear in any position on the reels and is, in addition, the highest paying symbol. 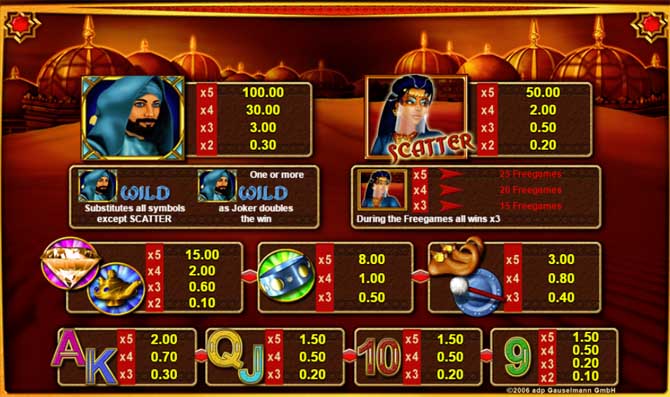 The Wild cannot, however, substitute for the female character symbol, as she is the game’s Scatter. She offers the second highest payout on the reels of Gold of Persia. But what’s more, she can also activate the single bonus feature that this game boasts. By landing 3 or more Scatter symbols, you can trigger the freespins feature. This will award you a different amount of freespins, depending on the exact amount of Scatters you landed. This way 3 or 4 Scatters will reward you with 15 and 20 freespins, respectively. Lastly, if you land 5 Scatter symbols during a spin, you will receive a maximum of 25 freespins. All freespin wins will be subject to a 3x multiplier.

Furthermore, this game also has a Gamble feature. And as is custom with Merkur games, the Gamble feature will provide you with a choice of two different side games. Each of them will allow you to either double your wins after a successful spin or potentially lose them. The first game is a double or nothing card game, whereas the second involves climbing a ladder.

Gold of Persia is reasonably entertaining and fast paced even. Its high variance can certainly make for some very handsome payouts. But the same can also be very dangerous for your bankroll, so spin carefully.