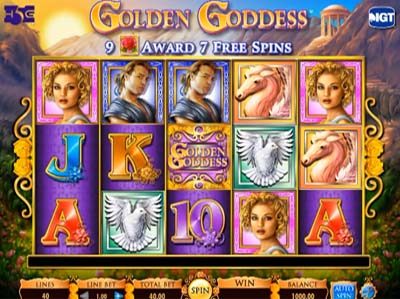 If you enjoy the thought of being transported to some far away fantasy world, or to some unlikely-to-happen romance novel, Golden Goddess will certainly provide everything necessary for that. It’s set against a back drop of mountains, greenery and a beautiful sunrise, while the reels have various lovable creatures on them. These include a pink-haired horse, a fluttering white dove, a vibrant pink flower, and two character icons alongside, one of whom is supposedly the male hero of the tale, and the other being the apparent goddess in question.

As well as the reels and rows, you’ll find a total of 40 separate pay lines have also been included by IGT. These are not customisable, instead being fixed in place. Gamers do have the option of altering their stake per round though, by utilising the plus and minus buttons of the line bet box. This changes between its minimum of £0,1 and increases up to its highest peak of £5 per pay line. This allows a total overall wager of £200 per spin to be played.

At the start of each spin, the reels contain stacked symbols which will transform into one of the other standard icons on the reels. All symbol stacks on a reel transform in to one and the same.

The game also includes the pink flower icon, which is its bonus icon. This will only appear on reels two, three and four, and if three should appear across these reels, you’ll be rewarded with a total of seven freespins. Here, you’ll need to pick a flower to reveal one of the animal or character icons. These will appear as stacked icons during the round and will transform all icons on that reel into the same symbol.

Finally, the game features a wild symbol, which is represented by its logo. This will substitute for any other symbol on the reels, except for the bonus icon, in order to make a win.

Golden Goddess provides a pretty entertaining game if you enjoy romantic fairy tale like products. Its special features do make it more bearable if not, though.