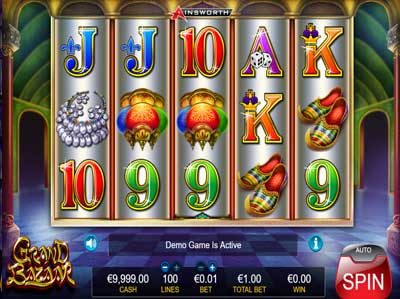 Grand Bazaar is a slot game by slot game manufacturer Ainsworth Game Technology. Slot games by this provider tend to follow the same setup, same layout and even very similar gameplay. But they are also very well known for exhibiting high quality graphics and entertaining themes. This slot game hardly makes an exception, as it takes us to the main market place somewhere in the Middle East. True, the building that we see in the backdrop of the game is empty. But you can tell that it is, indeed, a grand structure. You will even get a brief tour of it, when you land the logo symbol in a winning sequence. And speaking of symbols, you will see the common lower value playing cards symbols here, as well. But other than that you will also see some traditional Middle Eastern imagery, like lutes, pointed slippers and more. 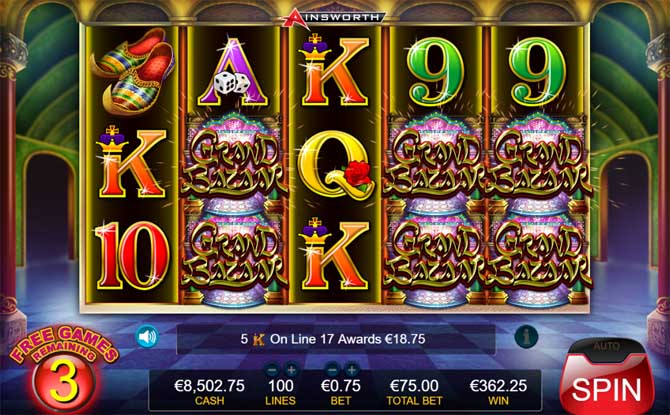 As pointed out earlier, the setup in Grand Bazaar is pretty standard, featuring 5 reels and 3 rows. Typically for this provider, there are a maximum of 100 paylines. Players are, however, free to regulate that number and play with a lesser one. As far as stakes go, they start off pretty high at £1 per spin and reach up to £75 per spin. The RTP, on the other hand, is pretty low at only 93.94%.

The Gran Bazaar logo symbol, which we mentioned above, is also the game’s Wild. And as such, it can replace any of the regular symbols, with the exception of the Scatter. That way it can help you land more winning combinations. Note, however, that it can only appear on the rightmost reels 3, 4 and 5.

But the Scatter is where the real fun begins. It is responsible for triggering the main attraction in Grand Bazaar – the freespins bonus feature. You will notice that it depicts a pair of hands cupping a large mound of gold and jewels. The Scatter can appear anywhere on the reels and can offer payouts of up to 100 times you total stake! But to trigger the freespins feature, you will need to land at least 3 Scatters in sight. 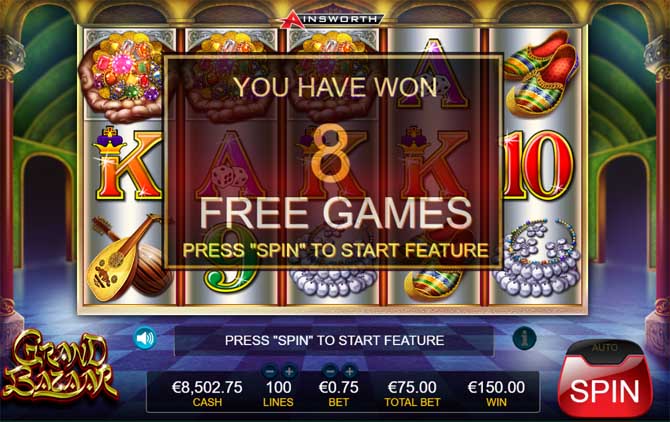 This will award you a total of 8 freespins, during which the Wild symbol will also be available on reel 2, as well. The Scatter, however, will only appear on reels 2, 3 and 4 throughout the duration of the feature. In addition, you can gain one more freespin by landing 2 or more Scatters. And there’s no limit to how many times you can do that. And last but not least, when you land the Wild symbol on reel 3, it will award you a multiplier of 1x, 2x or 3x for the remainder of the feature.

As is often the case with Ainsworth slot games, most of the action in Grand Bazaar is in the freespins feature. But it might not be so easy to reach it, due to this slot’s high volatility.