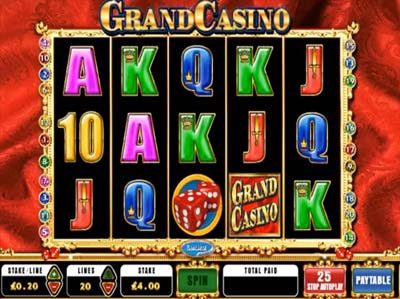 Grand Casino doesn’t really sound like the sort of title that a slot game would have, and instead is more of a title for an actual casino. However, this one from Barcrest Games is one of the developer’s most basic of slots, in terms of both gameplay and overall design. Upon the reels, you’ll find various icons, all of which are generally quite standard for a slot game. These begin with the regularly found A, J, K, Q and 10 icons, and they’re joined by standard symbols relating to casino games. They’re all designed in a fairly standard way, as Barcrest aren’t specifically the greatest when it comes to graphics.

It’s a five reel and three row game, so it’s still fairly standard on the whole as far as its interface is concerned, while 20 different pay lines have also been included. You can customise these to suit any personal gaming preferences that you might have, and additional customisation is accessible when it comes to the wager that you place. This offers up a range of between £0.01 to £500, and there’s also an ‘Autoplay’ button incorporated as well.

This game offers up a couple of different added special features, starting with its very own wild symbol. This is represented by the word ‘WILD’ written in gold, and this will substitute for all other symbols on the reels, except for the scatters, in order to form a win.

And speaking about the scatter icons, these are represented by the icon of dice, and if you spin three or more of these onto the reels in any location, you’ll trigger the Roulette Wheel Bonus round. In this, you’re able to spin the roulette wheel, and wherever the ball lands, you’ll win that amount. Alternatively, if you land on a roulette wheel symbol, the prizes will be increased and you get to spin the wheel again.

A freespins round is also incorporated into the game, which is activated whenever three dice icons appear on the middle three reels. A total of 10 freespins are offered up and all wins during this round are doubled as well.

Despite the fact that this game does look a little bit primitive and has fairly standard gameplay on the whole, the special features included within make it somewhat more intriguing.