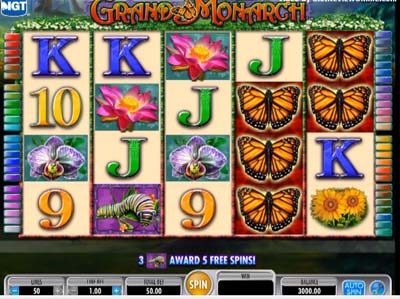 The monarch butterfly, or just monarch, is a milkweed butterfly in the Nymphalidae family. It is also known under other names, such, as the common tiger, milkweed, wanderer or black veined brown. Whichever name it goes by, it is considered to be the most familiar North America butterfly, and as such, it seems only right that it have an online video slot dedicated to it. One such slot game has been created by IGT, and it features various different theme-relative imagery as its icons. These include the insect in its larval form as a caterpillar, as well as the many different flowers that a butterfly may be enticed by. Of course, it also appears in its butterfly form as well.

The game has five reels and four rows worth of a layout, and IGT have also included a total of 50 different pay lines alongside. These are able to be customised, so if you like placing bets on fewer lines, feel free to change them. You’re also able to switch around the amount of your stake per spin as well, by using the plus and minus buttons in the ‘Line Bet’ section. This begins from its minimum amount of £0,1 per active line, and increases up to a maximum of £5. Therefore, if you have all 50 lines active and the highest line bet in play, you’ll be able to place a total overall wager of £250 per spin.

Of course, the symbol of the monarch itself is going to provide this game with its wild symbol, and this will act as a stand in for all other symbols on the reels, with the exception of the scatter. If you hit five of these on a pay line, you’ll receive the maximum win of £1,000.

The scatter icon of this game is the caterpillar, and these will provide you with a pay out wherever they show up. Should three of these come in to view on the centre three reels, you’ll receive a pay out of twice your wager placed as well as a total of five freespins. Five more can be gained by three additional scatters showing in the same place during the round.

Grand Monarch is a fairly decent video slot, that’s for sure. It’s not really breaking down any barriers as far as graphics and special features go, but could probably be considered another addition to the pack instead.