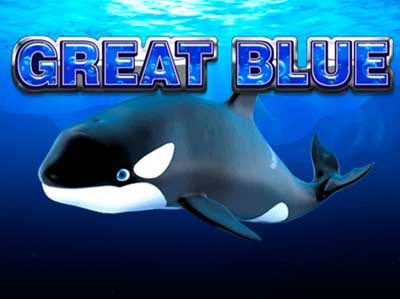 Great Blue is a slot game by software provider Playtech. It’s become kind of a classic over the years and you will soon get to see why. But as far as first impressions go, they really aren’t that great. The graphics are fairly dated, there’s no going around that. And overall the visuals here are quite basic. There’s a blue backdrop, representing the ocean depths, with air bubble rising from some of the symbols and from behind the reels and travelling all the way up to the surface. You can actually hear them when the reels aren’t spinning. But when they are, they’re accompanied by a rather generic-sounding backing track. The reels themselves are actually also blue, only a lighter shade. And from time to time, when you’re near triggering the bonus round, there will some exciting animated sequences to ramp up the excitement. 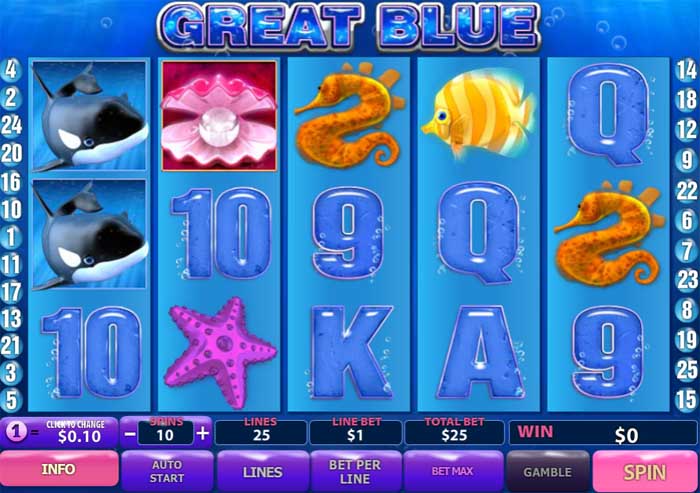 Moving on to the symbols, they feature the traditional playing card icons. They are all just plain blue bubble letters with small little air bubbles around them (ironic?). And the symbols in question are A, K, Q, J, 10 and 9. As for the higher value symbols here, they include an orange seahorse and a purple starfish. Following them is a yellow striped angelfish. And last but not least, we have a sea turtle and the terror of the seas – a shark symbol. These two are worth the most out of the other regular symbols, offering payouts of up to 750 times your stake. The layout in Great Blue is no different from the vast majority of online slot games in the industry. It features a regular grid of 5 reels and 3 rows. In addition, there are 25 paylines available in total. But players are free to adjust those, if they so choose. This makes for a pretty flexible betting range. If playing with all paylines, your wager possibilities will be from 25p per spin up to a total of £125 per spin. Be sure to keep in mind that the RTP in this slot title is rather poor at only 94.25%.

The lovely orca symbol in Great Blue is the game’s Wild. As such, it will be able to replace any of the other symbols on the reels and help you create more winning combinations. In addition, the orca Wild can also land in any position, anywhere on the five reels during gameplay. But what’s more is that this also happens to be the highest paying symbol in this entire game. Its payouts massively exceed even those of the shark and the sea turtle. As a matter of fact, lining 5 of these up on a payline can grant you a whopping 10,000 times your total stake. Another important thing you should know about the Wild symbol is that it doubles the payouts for any winning combos it partakes in. And there’s also one exception as to the icons that the Wild can substitute for, namely the Scatter. 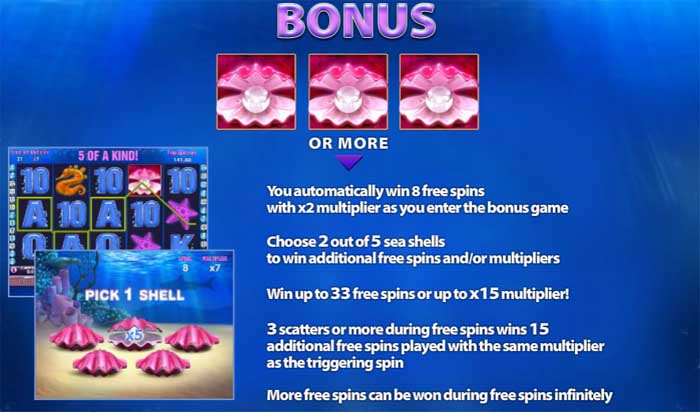 Free spins bonus round with up to 15x multiplier

In turn, the Scatter symbol comes in the form of a pink clam, revealing a dazzling white pearl. It too, just like the Wild, can appear anywhere on the screen, at any point during the game. It’s fairly lucrative, as well, comparing to most of the regular icons. But it’s more attractive in that it will be able to trigger this game’s single special feature – the freespins bonus round. In order for this to take place, you will be looking to land a total of at least 3 Scatters during the same spin. 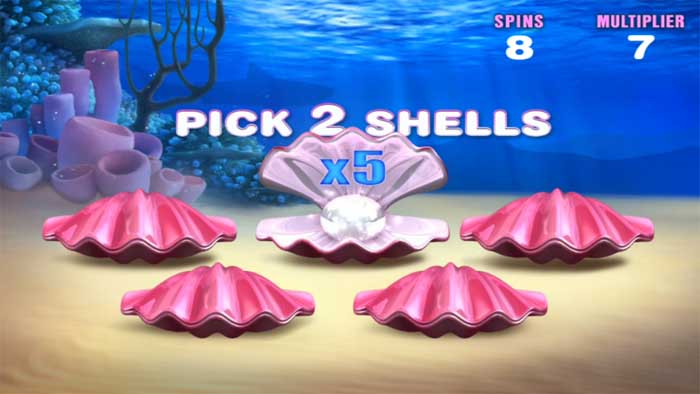 Once this happens, you will receive a total of 8 freespins and a 2x multiplier on all the freespins winnings. However, before they begin, you will first enter a new screen. This screen will reveal the ocean floor, with colorful corals and shadows of large fish in the background. And in the foreground, there will be a selection of 5 pink clams for you to choose from. You will have two picks, so choose wisely. The potential prizes that these clams can reveal are additional freespins and an increase to your multiplier. So, ideally, you can gain up to 33 freespins in total and receive up to a 15x multiplier. Better yet, you can retrigger the feature by landing another 3 or more Scatters. This will reward you with 15 extra freespins with the same multiplier as the triggering spin had. And you can keep retriggering the feature an infinite number of times. Plus, Great Blue also boasts a Gamble feature, which you can take advantage of after any winning spin. 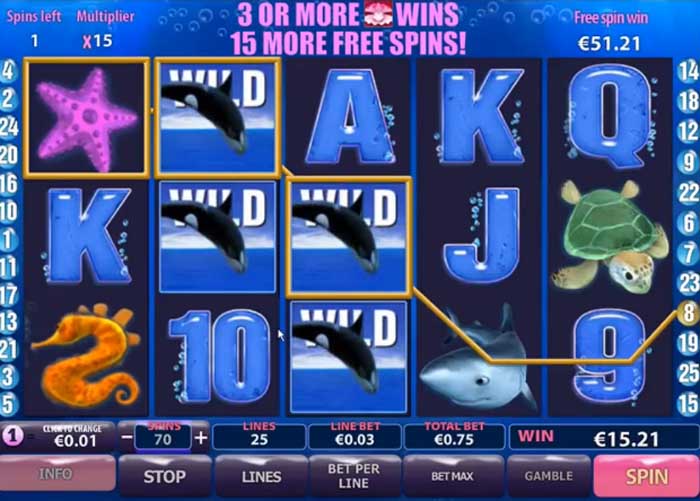 Great Blue is very straightforward and traditional in terms of its gameplay. You have the one special feature, with an interactive pick-me game before it. And you also have the grand opportunity of enhancing that special feature. What makes this title extremely attractive to players even to this day is its very high volatility. With this in mind, Great Blue can really make for some massive prizes.