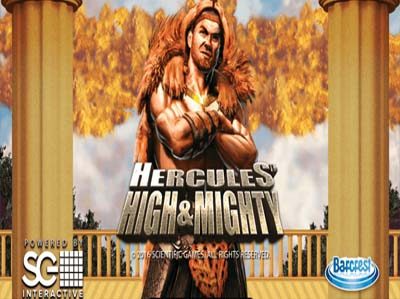 Hercules High & Mighty is a slot game by software provider Barcrest. Typically for this developer, there’s quite a bit of fine detail in the design of the game. As you can tell from the title, the theme centers on Greek mythology and players will see some iconic characters on the reels. The symbols mainly picture the fabled beasts that Hercules fought, such as the Nemean Lion and Lernean Hydra. Cerebrus, the three-headed dog and loyal guard of the underworld, is also present on these reels. Other symbols include Hercules’ object of affection – Iole and his father Zeus. The hero of the game is, of course, also present.

The initial layout of the game features 5 reels and 5 rows, with a total of 50 paylines. However, the rows can expand to 10, doubling the paylines to a maximum of 100. The stakes range from 50p to £500 per spin and players can expect a different RTP, depending on the mode they play in. Thus, with bets of less than £2 per spin, the theoretical RTP is 94%. With bets of £2 or more, the RTP rises to 96%, and players willing to take on the Big Bet feature can count on a 98% RTP.

In this game, the mighty Hercules is the Wild symbol. If he appears on the reels as an expanding Wild, the screen will expand to include the rest of the rows. This will double the paylines, and Hercules will cover the whole reel he’s on. This is the so-called Mighty Reels feature and it can take effect during the other special feature of the game – the freespins feature.

In addition, players can take advantage of the traditional Barcrest feature – the Big Bet mode. It will give you three possible bet amounts of £20, £30 and £50. Each of those options will give you 5 Big Bet spins with the Mighty Reels feature available, when the Wild appears. The differences are that the £30 bet will see the lower value symbols removed. And the £50 bet will make sure the Expanded Wild remains in place until a winning sequence appears. The lower value symbols will also be absent here.

Hercules High & Mighty is a fairly entertaining slot game with attractive winning potential. The Might Reels feature certainly adds to the overall excitement, as does the Big Bet feature.