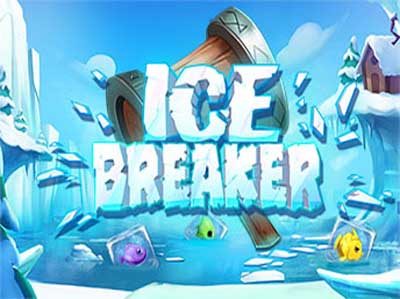 Ice Breaker is a really fun online slot game by slot machine developer Push Gaming. It has stunning visuals, featuring 3D graphics and an entertaining theme. The setting takes you to the glaciers around the South Pole, with tall blocks of ice covered in the snow lining the horizon. And that theme continues further onto the reels, with separate symbols being encased in blocks of ice. There’s also a neat soundtrack to accompany gameplay, which is always a pleasant touch. Besides that, there are also animated features to marvel at as you spin the reels. For example, you will notice that despite being in an ice cube, the fish symbols actually stare and blink at you. A little creepy? Perhaps. But in this context it’s rather more of an amusing feature. 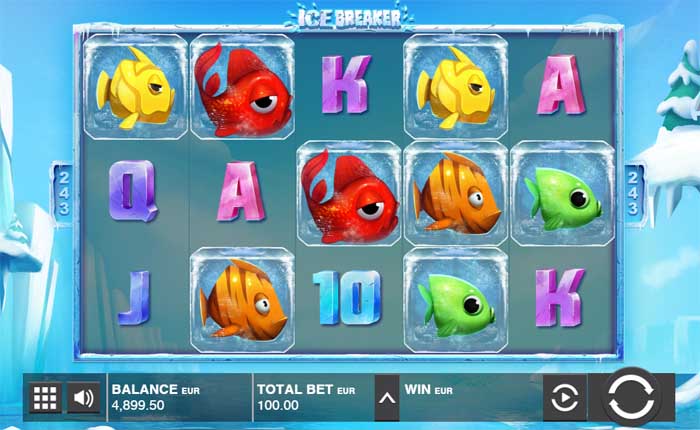 But now let’s actually examine the symbols a little closer. First we have the lower value playing card icons. These seem to be colored pieces of carved ice, so very fitting. And they include the symbols A, K, Q, J and 10. Next we have the higher value symbols, which are all different colored and shaped fish. The higher the payouts – the bigger the fish. First, there’s the smallest purple fish, after which is the green and yellow fish. Then last but not least we have the orange and the red fish. The latter can offer prizes of up to 10 times your total stake. We also have a few special symbols besides these, but we’ll get to them in good time. As far as the layout here goes, you will be looking at the most common 5 reel by 3 row grid. There are 243 ways to win here, so needless to say that you won’t have the opportunity to adjust paylines here. Stakes are fairly reasonable, ranging from 25p per single spin up to the maximum of £100 per spin. And you can count on a pretty high RTP of 96.79%.

First in line of the special symbols in this online slot game is its Wild icon. It depicts a clam, revealing a shiny golden pearl to the world. Now, this clam doesn’t offer any payouts of its own, nor does it appear everywhere on the screen. In fact, it can only land on the reels 2, 3, 4 and 5. It can, however, substitute for any of the other symbols and that way help you create better winning opportunities. The only exception as to the symbols the Wild can replace is the game’s Scatter symbol. It is, in fact, the Ice Breaker symbol, namely a hammer enclosed in a cracked block of ice. Just like the Wild, it also doesn’t offer any prizes or payouts of its own and it also cannot land just about anywhere on the reels. 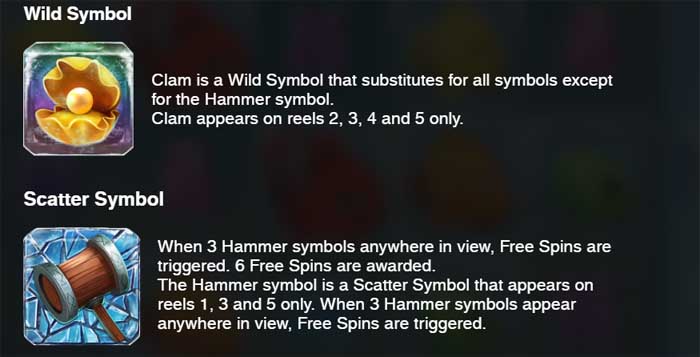 You can expect to see the Scatter only on the odd number reels 1, 3 and 5. And in order for you to benefit from this icon, you will need to land all three of these symbols simultaneously during the same spin. As a result, you will have triggered the game’s freespins bonus feature. This will award you a total of 6 freespins, but that’s by far not all. During the freespins bonus round, the lower value playing card icons will disappear from the reels. So, you will automatically be able to land higher wins already. Better yet, you can also retrigger this feature and benefit from even more freespins. To retrigger it, you will again need to land all three Scatter icons on the reels at the same time. This will award you an additional 6 freespins. 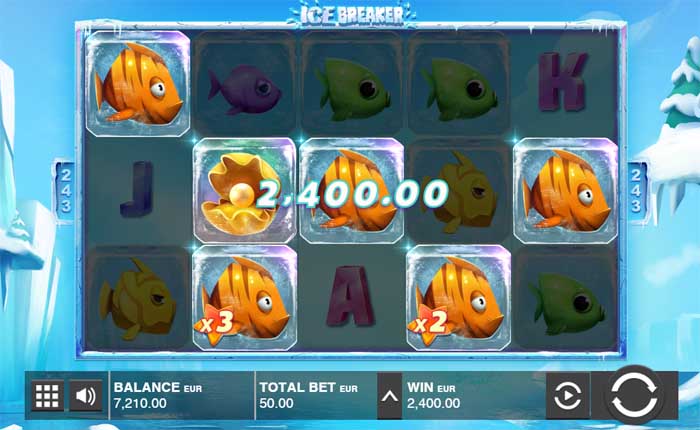 And there’s also one more feature that Ice Breaker boasts. The feature is Collapsing Reels and you can activate it by landing two or more fish symbols on the same reel. As a result, these symbols will combine into one with a multiplier value that is equal to the number of same symbols that landed. Hence, it can be either 2x or 3x. Furthermore, as the symbols combine and they free up spaces on the reel, new symbols will fall into place to take up those positions. As a result, you can potentially gain even more winning sequences during the same spin. You can also retrigger this feature if you happen to gain more of the same fish symbol on that reel.

Ice Breaker is an exciting, simple slot game that offers plenty of entertainment and superb visuals to along with it. There’s a whimsical sort of theme and features that can potentially prove to be rather rewarding. Of course, benefiting from the Collapsing Reels feature and the multipliers may be a bit trickier. But the freespins feature may prove to be a bit more accessible. Either way, it’s a decent medium to high variance slot game that offers a great balance of prizes and dynamics.