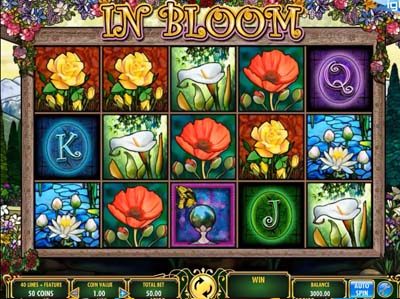 What better represents springtime than the blossoming flowers outside? That’s exactly the kind of feeling you’ll get when playing ‘In Bloom’ slot from IGT. It’s bound to put a smile on many people’s faces with its vibrant colours and intriguing inclusive soundtrack, which just resonates wonder and awe. The reels are filled with various different flowers, including a white water lily, a red poppy, a yellow rose and a calla lily. Each of these have been designed to fit well enough into the game’s theme of unfurling petals of flowers. It’s a really wonderful game that brings all the delights of spring whatever the season may be.

In Bloom is played on a five reel and three row layout. IGT has also added a total of 40 separate pay lines to the game as well. The lines are fixed in place, so you’re not able to customised them in any kind of way. However, you do have the option of changing your wager per round, which is done with the arrow buttons in the ‘Coin Value’ box. This starts from its minimum of £0,1 and increases up to £5. Therefore, with this maxed out, you’ll be able to place a maximum overall wager of £250 per spin.

The first and most interesting part of this game is that after any reel spin, flower symbols on a winning pay line may transform into variations of themselves. This means that you could see a single flower turn into a double, triple, quadruple or quintuple of itself. Wins are then evaluated afterwards, providing you with increased winnings if a transformation has taken place.

There’s a scatter symbol which is also included in this product as well. This is represented by the butterfly which has landed on an orb. Three of these appearing during the main game will pay out 60 times your total bet placed as well.

If two or more butterflies in any position on the reels show up, you’ll activate the ‘Garden Bonus’ round. Here, you’ll need to select a flower garden, which will provide you with a certain number of freespins. The Poppy Garden provides five freespins, the Rose Garden gives you eight, the Calla Lily offers up 10 freespins and the Water Lily rewards you with 12. During the freespins, only symbols of the chosen flower will appear on the reels, with the others omitted.

After the freespins round ends, the ‘Bonus Bump’ feature will begin. This requires you to pick an item and reveal a  win between one and 50 times your total wagere from the spin which triggered the ‘Garden Bonus’.

Upon first glance, this product doesn’t appear to be anything so wondrous. However, once you begin playing, you’ll see its special features start working and coming in to play. It’s innovative, exciting, and will have you smiling from ear to ear.