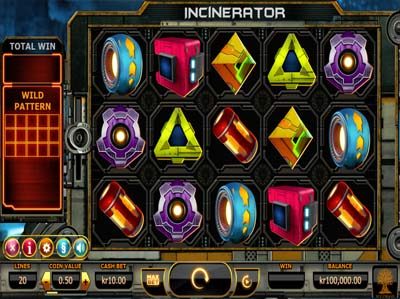 Incinerator will take you straight into the fiery heat of a junk planet, where the land is completely scattered with scrap metal and parts to be dumped straight into the chasm. As such, this is what you will find on the reels – metal and electronics all waiting to be thrown into the disintegrating fires. There are various different forms of these, from what looks like an illuminated tyre right through to a red cannister. The game also has a deep-toned piece of soundtrack music playing while you spin, adding further atmosphere to it.

It’s got the general layout of a five reel and three row interface, and Yggdrasil Gaming, who have designed it, have also included a total of 20 different pay lines alongside. You cannot adjust this in any way, but players do have the option of being able to change the wager that they place per round, and this is done by changing the coin value between its minimum of £0.01 and £10. Therefore, a maximum overall wager of £200 is able to be played per spin.

You’ll find that this game has a couple of different special features incorporated into it, and you’ll see the first of these as soon as you begin forming wins on the reels. Every symbol that is included in a win will be tossed into the incinerator, and this disintegrates the icons in order to make room for some new ones. If further winning combinations are formed, the process sets off again.

If you manage to get three consecutive wins, you’ll also trigger the Wild Pattern feature, and this will turn a group of symbols into wilds, according to the pattern which is seen on the left hand side of the screen. Wild icons will substitute for all others on the reels in order to form the highest winning combination from left to right. There are 16 different possible patterns for the wilds to appear in.

The fact that this game begins with a nice video package already gives you hints as to how great it is, but the fact that it also has wonderful graphics and intriguing game play presents players with an appealing option.