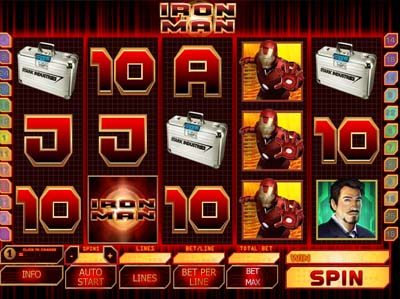 The official movie slot of the Iron Man franchise is brought to you in stunning fashion by Playtech. Presenting you with an adrenaline-pumping opening video package, you’ll be ready to set the reels off spinning in no time with this Marvel-backed product. And speaking of the reels, these are filled with various icons relating to the comic book hero, including a Stark Industries briefcase, a fighter jet, and one or two different incarnations of the title character himself, both as Tony Stark and as the super hero.

Playtech have put together a five reel, three row slot game here, and have also included 25 pay lines alongside. These can be customised to suit your own requirements, as can the coin value. This is able to be altered between £0.01 and £1, while the coins wagered per line can be altered between one and 10, resulting in a maximum overall wager possibility of £250 per spin.

The game’s logo acts as its scatter icon, and should you manage to spin three of these anywhere on the reels, you’ll trigger the ‘Missile Attack Bonus’ round. This requires you to shoot down incoming missiles, allowing you to win cash prizes, freespins and freespins multipliers. Freespins will begin once all prizes have been collected from this round, and if you manage to spin three more scatter icons during the freespins round, you’ll be granted 10 more.

The main game also features two different wild icons, both of the title character in different stances. These appear stacked on the central three reels, and should they cover an entire reel, they become an expanding wild, animating Iron Man in a unique way.

All Marvel slots by Playtech are also linked to four mystery progressive jackpots, those being ‘Power’, ‘Extra Power’, ‘Super Power’, and ‘Ultimate Power’. These are all won at random, where any spin of any amount in the main game can win entry to the jackpot game, which will guarantee a win of one of the four.

Being connected to the Marvel jackpots already brings enough appeal to this game, but the fact that it also incorporates wonderful graphics, a link to popular culture and has a bonus round is even better!