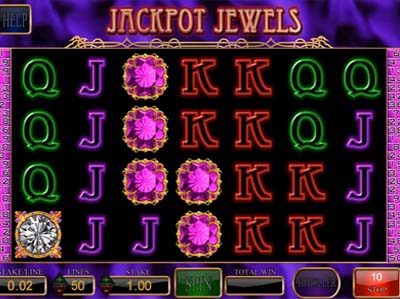 If you like a bit of a twist to your slot games, perhaps Jackpot Jewels from Barcrest Games will provide just that to you. Rather than offering up a regular five reel, or even three reel layout, this one instead provides gamers with a seven reel layout. With that being the case, the screen can look quite busy at times, but it keeps the icons involved very simple on the whole. These exist in the form of the standard A, J, K, Q and 10 symbols, which are joined by five additional gemstone icons – one blue, one pink, a green one, a red offering and a clear crystal one.

As noted, the game features seven separate reels, and these are joined by four rows. Barcrest has also included a selection of 50 different pay lines as well. You’re also able to change around the wager value per round, and this is done by using the arrows next to the ‘Stake’ box. There, you can change the value between £1 and £400.

There are only one or two specialities incorporated into this game, and these begin with its wild icon. This is represented by the bejewelled broach, and as a wild it will substitute for all other symbols on the reels in order to form a winning combination. This one also acts as a scatter icon as well, and if three of these appear on reels two, four and six you will initiate the freespins bonus round. A total of 10 freespins will be provided to you for this round, and it includes progressive multipliers as well.

You’ll also notice that there is a ‘Hi Roller’ button included alongside, and if you press this, you’ll be able to play five hi-roller spins for a specific amount, which you select yourself from a range of £20 and up to £500. Any wild scatters appearing during this round are held in place for the duration of the hi-roller round.

It’s hard to say how we feel about Jackpot Jewels, because apart from the additional two reels, it doesn’t hold anything spectacular as far as special features, graphics and overall gameplay is concerned.