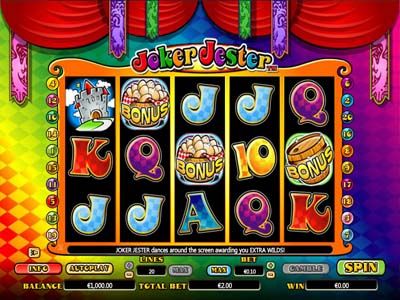 Joker Jester provides a standard slot game, featuring icons based around Jesters. Therefore, you’ll play a game that’s filled with symbols of a Jester’s musical instrument, the castle where a Jester performs his entertainment act, as well as several often-seen icons like A, K, Q, J and 10. And while the game isn’t such a contemporary product, it does have several special features that make it quite compelling.

There’s a total of five reels and three rows to play on, and the paylines included reach a maximum of 20. These can be altered down to the very minimum of one payline, should you feel so inclined to do so, and the coin value included can be altered as well. This begins from the minimum of £0.02 and can increase up to £4.00 per payline. Therefore, a total maximum wager of £80 is able to be placed across all 20 paylines per spin.

Joker Jester offers up a wild symbol, which is that of the jester himself. This will substitute for all other symbols on the reels to create a win, except both of the game’s bonus symbols and the scatter icon.

The scatter symbol is represented by the multicoloured juggling balls, and these pay out an increasing bet multiplier with the more icons that appear.

In addition, there are two bonus scatter symbols, one of which is a basket of eggs and the other a wooden barrel. The first appears on reels one, two and three, while the second on reels three, four and five.

Should you spin three of the basket symbols, you begin the juggle bonus round. This sees the jester begin juggling with three eggs, and it’s your job to add more eggs into his juggling act. The more eggs he juggles before dropping them all, the higher your prize.

Should you spin three of the barrel symbols, you’ll start the barrel bonus round. You’re presented with a selection of wooden barrels, and here you get to choose barrels to receive cash prizes. This continues until the jester pops out of one of them.

Joker Jester may be one of NextGen Gaming’s older products, but it has great special features that make for an entertaining game.