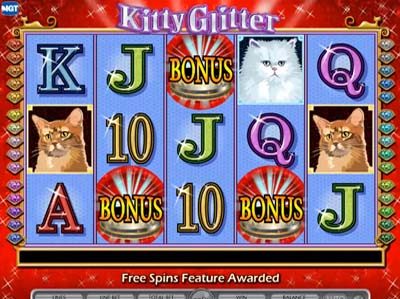 If you’re somewhat fond of feline animals, Kitty Glitter from IGT should be just the game for you. It’s completely dedicated to everything relating to cats, so you’ll certainly get a thrill from spinning its reels. Of course, it will be fairly obvious that the majority of the icons included in this game are completelt cat related, so you’ll find one or two different breeds adorning the reels, including both Siamese and Persian varieties. They haven’t really had the utmost care put into them graphically speaking, and instead take on a more ‘painting-by-numbers’ look.

The game is played on a set of five reels and three rows, and the developer has also added a total of 30 pay lines into it as well. These pay lines can be altered if you have a preference for wagering on less, with the amounts you can have active changing from one up to five, nine, 15 and finally, the maximum 30. The stake you wager each round is also alterable, with the ‘Line Bet’ box able to switch your bet per line from £0,1 up to £5. This allows a maximum overall wager to be placed of £150 per spin.

The game doesn’t feature too many specialities, but these do start off with the inclusive wild symbol. This is represented by the game’s logo, and it will only appear on reels two, three, four and five. Should it do so, it will substitute for any other icon on the reels to form a winning combination, with only the scatter symbol as an exception.

And speaking of the scatter symbol, this is represented by the cat bowl which appears to be filled with sugar cubes. Should three of these appear in any position on the reels, you’ll trigger the freespins bonus round. You’ll be given an initial amount of 15 of these, and the scatter icon will only appear on reels two, three and four of the base game.

The freespins round does have an extra added perk, which is a diamond symbol. This only appears on reel five, and if it does, it adds a diamond to the bonus table at the bottom of the slot. When all three diamonds are filled next to a symbol, it becomes a wild icon for the freespins round.

Kitty Glitter sounds like a game that is fit for little girls, and at first glance, it’s fairly clear that it won’t reallly appeal to a mass of adults – unless they have a deeply fond love of cats.