Legend of the Pharaohs Slot 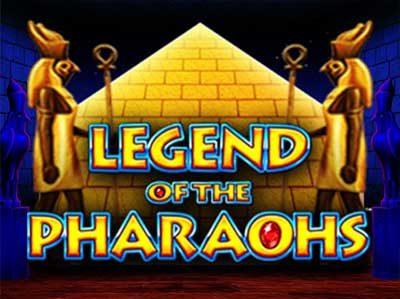 Legend of the Pharaohs slot review

Legend of the Pharaohs is an Ancient Egyptian slot game by UK software developer Barcrest. We know Barcrest slots to typically boast pretty decent visuals, and that’s very much the case with this particular title. There’s a lovely dark blue setting here, providing an ideal contrast for the bright and colorful symbols on the reels. The backdrop takes you deep inside a pyramid, with nothing but a long corridor ahead of you. Oh, and darkness of course, there’s nothing but darkness around. So there’s kind of a creepily exciting vibe here, too. There’s also a matching soundtrack to confirm that. And things get especially dramatic once you land a winning combination, so you might want to look out for that, too. 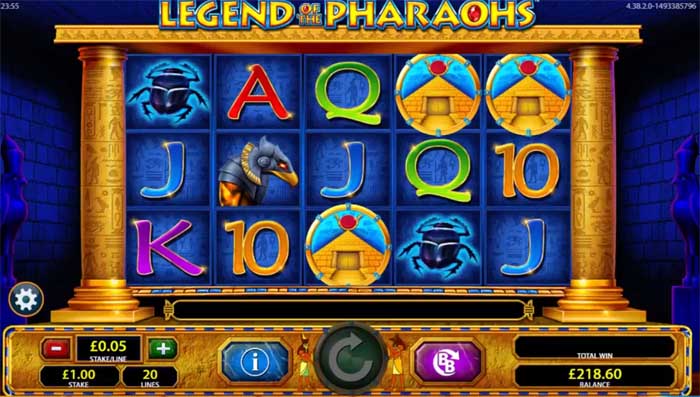 Now, moving on to the symbols on these reels, they include the lower card icons. All icons have a different bright color, such as red, orange, green and purple. And they features the symbols A, K, Q, J and 10. Note that they’re also appropriately styled to fit in with the slot topic. But this takes us on to the higher value symbols and first in line is the scarab beetle. After that we have an anthropomorphic deity, with what appears to be an eagle’s head. But it’s certainly not your traditional depiction. Moving on, we have the All Seeing Eye and the ankh symbols – both very typical symbols for this genre. And finally is the game’s logo, which is also the highest paying icon on these reels. With its help you can pocket up to a total of 100 times your stake. As far as the layout here goes, there are 5 reels and 3 rows and 20 available paylines. The number of paylines is fixed, though, so no adjustments will be possible. And the stakes in this game reflect as much, with the minimum bet you can make being 20p per single spin. The largest amount you will be able to wager is £500 per spin. Typically for this developer, the slot RTP here can range from 96.10% to 98.1%, depending on your stake.

First off, let’s introduce the Wild symbol in this slot, depicting a crook and flail. This isn’t a particularly lucrative symbol. But it will be able to substitute for all other icons on the reels. This will help you create better winning opportunities and, therefore, potentially gather more wins. However, it can only appear on the leftmost reels 1, 2 and 3. In addition, there are also two exceptions as to the symbols that the Wild can replace. These are the two Scatters: the Blue and Red Pyramid symbols.

Now, the Blue Pyramid symbol can show up in every position on the five reels. It will be responsible for triggering the freespins bonus round, for which purpose, though, you should get at least 3 of these symbols during one spin. As a result of this, you will receive a  total of 10 freespins. However, the number of Scatters will determine the number of active bonuses during the feature. 3 Scatters will activate only one bonus, whereas 4 and 5 will each offer you two and three bonuses, respectively.

One of these bonus extras is Wild Reels feature, where a Wild can turn an entire reel Wild for the whole bonus round. In addition, there’s the Wild Symbols bonus, where one random symbol can also become Wild. Then there’s also the Colossal Symbol bonus, where one random symbol will cover all positions on the middle three reels. And finally, you can also benefit from the Win Eliminators feature, where all the lower value symbols will disappear from the reels. 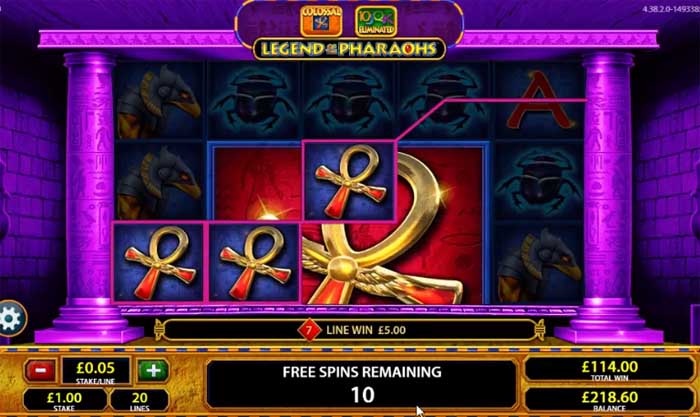 Legend of the Pharaohs is all about the freespins round, where the largest prizes will be set to come from. It’s a medium variance title, where you have a good chance of triggering the bonus. But of course, winning chances increase with your stake amount. There’s also the hallmark Barcrest feature of the Big Bet mode. As part of it, you can buy 5 linked spins with better winning opportunities and a higher RTP. In this particular slot, you will have 4 different stake options, ranging from £20 to £30.