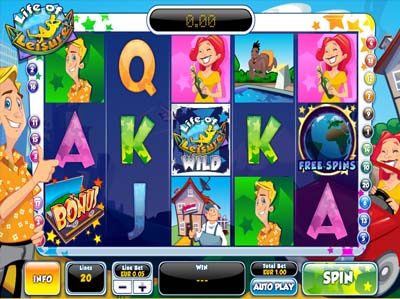 What would you do if you had all the free time in the world? Well, Ash Gaming’s ‘Life of Leisure’ slot game might just give you a few ideas on that. If you can manage to get by without wanting to smash your computer screen due to the awful music, you’ll find icons on the reels of people enjoying their leisurely days. One man has clearly been painting the exterior of his house pink, another is diving into his pool. There’s also a woman with a bottle of wine in her hands, as well as another man who doesn’t actually appear to be doing anything.

The game is played on an interface of five reels and three rows, and there’s also the inclusion of 20 separate pay lines as well. These are fixed in place, so you won’t be able to customise them in any sort of way, but what you can alter around is the amount of the wager you place. This can be done with the plus and minus buttons on the interface, and it begins from a minimum of £0.01 and increases up to £10, giving players an overall maximum wager amount of £200 per spin. Although, the line bet amount can only be increased by £0.10 per click of the plus button, as there’s no ‘Max Bet’ inclusion, which makes it a bit of a hassle.

The first of several features added to this game is the wild icon. This is represented by its logo, and when it is included in a winning combination, it will substitute for all other symbols on the reels, except scatters.

The icon which shows the word ‘BONUS’ on it is this game’s scatter icon, and if this appears anywhere on reels one, three and five, you have the chance to win up to 800 times your wager placed on the ‘Path of Plenty’. You’ll need to roll the dice to move along the trail, and doing so will have you land on one of several squares to win either an instant cash prize, the chance to play a mini game, the opportunity to move along the trail, or landing on a ‘Collect’ icon will see you collect any winnings and leave the bonus round.

The mini games included are five strong and will see you either playing golf, decorating a house, looking after three different children, participating in a skiing event or going shopping. If you reach the end of the path of plenty, you’ll get to spin the ‘Wheel of Wealth’. If you land on a jackpot, you’ll win the progressive which is shown at the top of the reels. Alternatively, you could win up to 5000 times your total wager placed.

Finally, if the freespins icon lands on reels two, four and five in any location, you’ll be rewarded with up to 700 freespins on super enhanced reels! Every reel has bonus and freespin scatters included, which will increase your chance to walk the ‘Path of Plenty’ or re-trigger even more freespins.

This game is filled with wonderful and entertaining special features, making an otherwise mediocre looking game come to life in a vision of splendour.