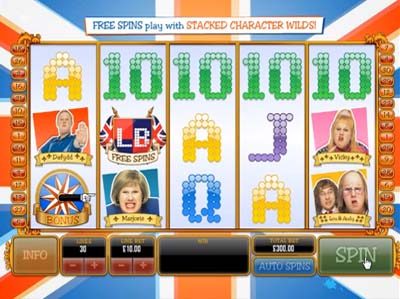 The interface of this game from Ash Gaming comprises five reels and three rows, while the amount of pay lines included stands at 30. These can be customised to suit your own wagering preferences, as can the line bet amount. This ranges from its minimum amount of £0.01 up to £25 per line. This means that the maximum overall wager which is able to be played by all gamers per round stands at £750.

The game’s logo acts as its wild icon, and this will replace all other symbols on the reels in order to create a winning pay line. The only exception to this rule is the game’s scatter symbols.

The first of these scatters is the pointing finger icon, and if this appears anywhere on reels on, three and five, you’ll be able to choose from one of five different character bonus features. You can read about each of the bonus rounds before choosing to playing one. The first of these is ‘Vicky Pollard’s ASBO Bonus’. In this round you’ll need to select an task for Vicky to perform, and the more time she uses, the more cash you’ll win.

There’s also ‘Lou and Andy’s Love It Feature’, which requires you to choose gadgets that Lou can pass on to Andy. Each of these earns you a cash prize. ‘Marjorie Dawes’ Fat Fighters Feature’ sees you opting between silver trays to expose the food below, winning cash prizes in the process. You could choose to play ‘Daffyd’s Big Gay Feature’, which requires you to shuffle three times to help the character get dressed, with every complete costume earning you a pay out. Finally, ‘Emily Howard’s Lady Things Feature’ sees you having to select objects for Emily’s room for cash wins.

If you spin three freespins icons onto reels two, four and five, you’ll receive 10 freespins, which feature special wild stacks. There’s also the inclusion of ‘Anne’s Wild Bonus’. This sees the character of Anne appear randomly during any spin, and she’ll throw objects at icons to turn them into wilds.

Anyone, regardless of whether you’re a fan or not of the television show, will be able to appreciate the various bonus rounds and game play included in this one.