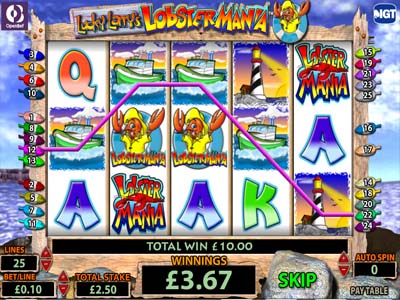 For those of you who enjoy your slot games with a bit of fun injected into them, Lucky Larry’s Lobster Mania could be just the game you’re looking for. Brought to you by IGT, it brings you all the wonders of the sea, and puts a great big twist on them to provide you with an entertaining game. Upon its reels, you’ll find icons of various different marine-related objects and creatures. The first of these is a lobster caught in a cage, there’s also a shining light house, oddly enough there’s a paint brush that is being dipped into the sea, and to top them all off, there’s a boat sailing on the waters.

The game is played on a five reel and three row layout, while IGT have also included a total of 25 separate pay lines as well. These can be customised to suit your own personal preferences, as can the amount of the stake you place per spin. This is done by the plus a minus buttons to the right of the ‘Bet/Line’ box. The amount alters from its minimum of £0.01 per active pay line, up to its highest level of £20. Therefore, all players have the chance to place a maximum overall wager of £500 per spin.

There’s a really odd, but fun icon of a lobster wearing some sunglasses and this acts as the game’s wild icon. This will substitute for all icons on the reels in order to form a winning combination, with the exception of scatters and bonus symbols.

Lucky Larry, who appears to be a lobster wearing a raincoat, is the game’s bonus symbol, and if three of these symbols show up on an active pay line, you’ll initiate the ‘Bouy Bonus’ round. This requires you to select a ‘Pick Me Lobster’ to reveal how many bonus picks you’ll get, with amounts of two, three and four available. Then, you need to select buoys in the bonus scene, each of which will add at least two items to the trap. Larry will then pull items from the trap, one at a time, with each item being worth between five to 250 times the initiating bet.

Finally, the scatter icon in this game is represented by the trapped lobster, and these will offer a pay out regardless of where they appear on the reels. Should five show up, your bet placed will be multiplied by 200 times.

This game presents all players with the chance to experience a wild and fun product, featuring many special features and additions.