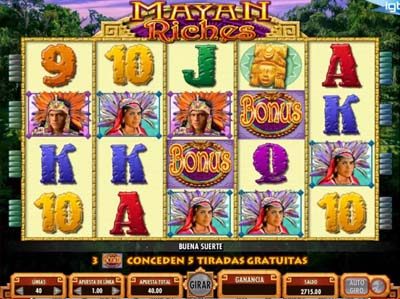 Mayan Riches from the developers at IGT presents a wonderful product to play. Its reels are filled with a couple of character icons, one male and one female, as well as symbols of different buildings and craftsmanship. These icons are accompanied by A, J, K, Q, 9 and 10 symbols.

The product presents players with five reels and four rows worth of an interface, while also offering up a total of 40 pay lines. These are able to be customised should you have the preference to do so, and all players can also alter their stake per round as well. This is done with the plus and minus buttons at either side of the ‘Line Bet’ box, and this ranges from its minimum level of £0,1 through to a high amount of £5 per active pay line. This allows a maximum overall wager of £200 per spin.

The game’s wild symbol is represented by the Mayan temple, and this will act as a stand in for all other icons on the reels, with the exception of the bonus icon.

As far as the bonus icon goes, this is represented by the symbol with the word ‘BONUS’ etched on to it. Should three of these appear on the central three reels, you’ll receive a double multiplier of your total bet and be on the receiving end of five freespins.

Mayan Riches presents players with a greatly themed game, which includes intricately designed icons and game play. It doesn’t have a huge amount of added features, which does it let it down slightly, but on the whole, it’s a very entertaining game to play.